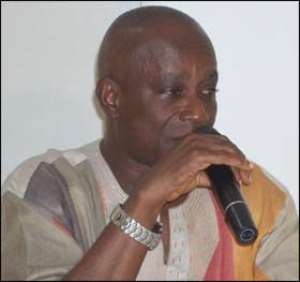 , former Ambassador to Cote d'Ivoire, has cautioned against the temptation of using the various public hearings currently going on in the country as mechanisms for witch-hunting.

He said the purpose of the public inquiries should be to hold public officials accountable in a transparent manner so as to strengthen democratic governance and accountability in the country, advising,

“The process should not be seen as an extension of political warfare”.

Ambassador Kabral, who is a professional journalist, a full time writer and a consultant on good governance, media and diplomacy, was speaking at a three-day workshop for Parliamentary Press Corps at Sogakope in the Volta Region.

The workshop which was organised by the Canadian Parliamentary Centre was to, among others, equip the Press Corps with the necessary skills to accurately report on the public hearings of the Public Accounts Committee of Parliament scheduled to take place from August 19-24, 2009.

Emphasising that he does not believe that the various public hearings are aimed at witch-hunting, Ambassador Kabral urged the media to be fair to all parties so as not injure the reputation of people who may be appearing before the Public Accounts Committee, adding, “The process should not be seen as an extension of political warfare”.

He said the coverage of the public hearings should be seen as a national duty geared towards the strengthening of good governance in Ghana.

“Those who will cover the impending public hearings should liken their coverage to covering of courts, commissions of enquiry or Parliament. The reportage should be pristine and unplugged, the bare facts, and nothing but the bare facts,” Ambassador Kabral admonished.

The first in the series of this year's public hearings of the Public Accounts Committee will cover the Performance Audits of the Auditor-General's Reports on six areas.

They are the Performance Audit Reports of the Auditor-General on the Management of Ghana Police Residential Accommodation, Business Registration in Ghana, Accountability Arrangements in Solid Waste Management and the Management of the Human Resources for the Effective Primary Health Delivery by the Ghana Health Service.

The rest are the Performance Audit Reports on the Public Servants Housing Loan and Report of the Auditor-General on the Public Accounts of Ghana Pre-University Education Institutions for the period ending December 31, 2009.

The Chairman of the Public Accounts Committee of Parliament, Albert Kan Dapaah, said the public hearings on the performance audits would possibly be followed by financial and forensic audits among others during the year.

He gave the assurance that the Committee will do its work dispassionately and be fair to all persons devoid of partisanship.

According to Hon. Kan-Dapaah, who is also the Member of Parliament for Efigya-Sekyere West, membership of the committee is almost evenly divided, with 13 and 12 members from the Majority and Minority sides respectively, and therefore there will be no room for any “capricious and whimsical decisions”.

He noted that the media as the fourth estate of the realm has a critical role to play to ensure that “Ghana's democracy grows from strength to strength, and this we can do effectively by playing our respective roles as watchdogs professionally and effectively”.

He challenged the media to do follow-ups after the public hearings to ensure that the recommendations that would be given thereafter are fully implemented, acknowledging that both the Parliamentary Press Corps and the previous Public Accounts Committee have  failed to find out whether the directives and others given during the last hearings have been complied with or not.