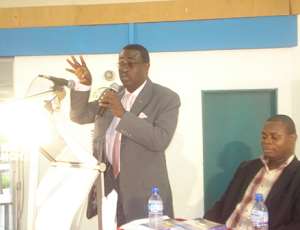 Under the auspices of IMANI and the AfricanLiberty.org, we managed to pull off yet another important speaking assignment. Captain Budu Koomson is co-founder of Unique Trust Financial Services, Ghana's most celebrated business. He spoke to a 105 audience at the British Council in Ghana on why professionalism, when dealing with Politicians, was a better path to economic development than partisanship. .

Read his Full speech below

PROFESSIONALISM VS. PARTISANSHIP: WHITHER GHANA?

Lecture series.
The Imani 'Thought Leasers Forum' is an avenue under which Imani; a local Think Tank provides a platform for civil

society and leaders from various wings of society to air their views on national issues in a non-partisan way.

Imani believes Ghana has great people, with great ideas and views which may be hidden because not everyone will go

on radio or mount a political platform, we also believe it is good for civil society to air their views and give our leaders

alternatives and viewpoints they may not have considered, all in the effort to enrich national discourse and improve

governance.
From time to time Imani will be putting up various citizens and people to deliver these lectures and throw up issues

and ideas for nation building.
The executive director of IMANI, IMANI Fellows and if there are any aspiring fellows here, I am greatly

honoured to be singled out by this prestigious small group to be a member.

It does not cease to amaze me how often having a choice becomes a challenge. Deciding on mundane things

don't work on it.
Choosing what topic to talk on has not been easy but finally I decided to speak about a topic that has been

agitating me lately-Professionalism vs. Partisanship: whither Ghana? I was not so sure about this topic

me for how hollow I am?
Well, be it as it may, please hear my thoughts and frustrations and let's have a conversation.

NATIONAL ISSUES.
1. Who is a
• Professional
• Partisan
• Technocrat
• Intellectual
2. What do we wish, yearn and aspire for as a people?

3. Are our actions as a people taking us in the right direction?

4. Do we really have professional leaders in Ghana?

5. Do we really want them?
Definitions
• PARTISAN
ADVANCED LEARNER'S DICTIONARYPartisan
- Strongly supports a particular person or cause often without thinking carefully about the matter.

Partisanship - support for a person or group without fair consideration of the facts and circumstances.

2
Military - ordinary people, rather than soldiers, who join together to fight enemy soldiers who are occupying

their community.
WEBSTER'S BRITANNICA DICTIONARYa)
An adherent to a party faction, cause or person.
b) An adherent characterized by prejudiced, unreasoning, blind or fanatical allegiance.

Professionals - People who do a particular thing to earn money, rather than as a hobby.

preparation including instruction in skills and methods as well as in scientific, historical or scholarly principles

underlying such skills and methods, maintaining by force of organization or concerted opinion, high

standards of achievement and conduct, and committing its members to continued study and to a kind of

work which has for its prime purpose the rendering of a public service.

Intellectual - Someone who spends a lot of time studying and thinking about complicated issues.

Intellectual - A person given to reflective thought or reasoning, endowed with the power to know and

reason, engaged in mental as distinguished from manual labour.

• TECHNOCRAT
ADVANCED LEARNER'S DICTIONARY –
A scientist, engineer or other expert who is one of a group of similar people who have political power as well

b) Under a democratic arrangement, technocrats are responsible for the efficient running of systems and processes.

There is no gain saying that, yes, as a people we wish for strong professional leadership and systems that

will boost development at all levels of our national institutions and aspirations. Be it at the Executive level,

a people taking us there and do we really want them? I dare go as far as to ask whether we have it within in

3
us to achieve what we wish!! Tragic!! We quote Malaysia, Korea, etc and wonder how progressive,

developed, disciplined and clean these countries that we started out with are, but we don't have it in us even

to keep cattle off our urban roads. We don't have the discipline, the courage and the stomach to carry out

this simple task and people keep dying!!
My main aim today is to provoke a public debate or conversation on this topic so I would mention a few

levels of leadership and institutions and ask questions.

abandon of political leaders of all shades just to win power?

around after they voted, directly countering security instructions.

happen because they said they cannot control them.
• Under President Kufour's watch, there was a dangerous leadership vacuum at a critical time during

the last elections, which provoked me to go on air (both TV and Radio) to ask where the leadership

was, when it most mattered.
• Under President Mills, we sometimes really don't know who is in charge; the Party or the President?

Don't they consult? There is serious business of state to be done. Yet, all we see is political vendetta,

who did what, to who, when and where! as portrayed in the song by P-SQUARED' “you do me I do

• Total economic limbo and near paralysis - all boards suspended! Was that the best way to go about

it? Could it have been done otherwise? And, are we sure it is not going to happen again?

PARLIAMENT
• The Ex-Speaker and matters arising!
• Paying of ex gratia awards and perks. I guess that sometimes they themselves are ashamed of some

of their privileges. That is why the information is not made public

lately by some of the Security Services lately
• Problems associated with changeovers! How long are they going to look on and do nothing?

SECURITY SERVICES
Here I want to sound an alarm bell! If we keep on changing their top brass with every new change of civilian

masters, there will come a time when we will be left with the never-do-wells and riff raffs to head the Armed

Forces, Police, BNI etc.
Those systems have a way of sorting themselves out when left on their own. Hitler paid a high price for

interfering with the military High Command as did Uganda. Question is what informed the latest wholesale

shakeup in the military and police set ups? Will it really stand up to public forensic scrutiny?

THE JUDICIARY
Do we as a people really believe that our judiciary is not corrupt and delivering as they should?

It is said that justice delayed is justice denied. Where are we?

Is our judiciary really helping the achievement of our aspirations, development of businesses, and fight

against crime? Try registering your land or go to court on a land issue!!

4
THE MEDIA
I think the least said of this “fifth Estate of the Realm” the better. What is their role?

• To inform
• To educate
• To entertain, etc. etc
But what do we see? One Radio Station could have single-handedly ignited a Rwanda here in Accra. Thank

God for blessing Ghana with a preponderance of cowardly souls and so, nothing happened.

antagonism, verbal violence, and partisanship at play in the discussions. The Media's lack of respect,

especially, for those of us without that level of access to TV, Radio and print, is appalling. They publish and air

lies and half truths about people with little regard for the careers and lives they may be destroying .Even

worse is their disrespect for their own commission.

That is not to say it's all negative. There are, indeed, a few struggling ones doing a wonderful job but it's

woefully inadequate.
The list goes on and on.
THE SOLUTION
A few things I've come to adopt for my life and recommended to any group I come to lead or talk to are:

a) I say Giving Up is not an option. You can curse, cry, shout etc but one thing you can't do is give up!! I've

been through many things personally that has shaped this mindset.

b) Don't just be a spoiler, be a builder too. Don't just criticize, offer some suggestions and solutions. That is

the essence of management.
Looking critically at the four groups of people we earlier identified, I would suggest that the least dangerous

of them is the Professional. These are people, very often doing what they love and are passionate about and

caught up in their own comfy small clubs offering services for a fee. Yes, they can mess us up at times but

they are largely self regulating and can be monitored and controlled by others.

The next group that can cause some developmental trouble is the Partisan. Though physically dangerous,

they can also be contained. They get blinded by their partisanship and, the worst of them, deliberately lie and

descend to any level to argue their case. The less egregious partisans give factional rational arguments but

the best light. These partisans can still provide a valuable service so long as:

b) They are only one part of a diverse and balanced opinion diet.

This is why it is critical to have a strong opposition party or two. Most politicians of either party fall into this

second and less egregious level of partisanship. Unfortunately, they wield political power but, mercifully, the

5
electorate, sometimes shamelessly, to give them a new lease of life. This means we can do something about

them if we really want to.
In my opinion, the most dangerous and critical group that can and is affecting our national developmental

aspirations are the technocrats. Just revisit their definition –

a) Experts who have political power a well as technical knowledge

c) Under a democratic arrangement, technocrats are responsible for the efficient running of systems and

To a large extent, this is the civil service populating our ministries, departments and agencies. They are

everywhere but they are not voted into office, very difficult to sack or sanction, very lethargic, corrupt and,

sometimes, even partisan. This group is what we call “government come, government go, we dey”. These are

responsibility of ensuring that systems and processes work under our democratic dispensation.

Now, if professionals are just taking care of themselves and their business, and politicians have such a

tenuous hold on power, then why don't we turn our attention to this ever-present group (technocrats) and

ensure that we build strong institutions and insulate them from transitory political assault?

agenda and ensure that they are well regulated, empowered and that, at all times, they are doing what they

are supposed to do in the best interest of the state and the public they serve.

This is my humble suggestion. Now let us have a discussion.