Decongestion: An exercise in futility 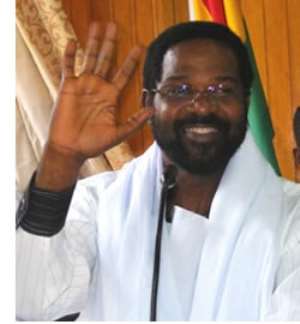 Of all the problems in Accra, the city's new mayor has made it a top priority to get rid of street hawkers in the central business district and a couple of other commercial centres. It's been tried before. Alfred Vanderpuije knows it but he seems determined to succeed where those before him failed. But he won't do any better than his predecessors. The so-called decongestion exercise will fail – again!

Mr. Vanderpuije's advisors should tell him to focus on more pressing issues – like developing an efficient drainage system, sorting out the city's garbage issues and ensuring that Accra is as well-planned as a capital city should be. If he goes on with this decongestion exercise, money would be wasted but the situation won't change – the same scenario as four three years ago when about three hundred thousand Ghana cedis (or three billion cedis) went down the drain in a needless and futile attempt to get the hawkers off the pavements of Makola.

Let's face it. The central business district of Accra is a commercial centre. The whole area is one big market and like every market we should expect the area to be a congested beehive of economic activity. Most African markets are like that. We've lived with it for decades and it's hard to see why the mayor wants to change it.

These hawkers are on the streets because they need to survive. Government should be looking for ways to help their small businesses thrive instead of hounding them with batons, destroying their stalls and breaking their wares.

We live in a country where jobs are hard to come by. The only way for most unemployed men and women to earn a living is to sell on the streets. These people sell odds and ends just to be able to feed themselves (often with 'gari' and 'moko yerawa'). I don't think that the hawkers selling on the pavements in the central business district of Accra (and some other major cities in Ghana) enjoy standing in the scorching sun for the fun of it. If they had any other alternatives (like working in air-conditioned offices even as cleaners and messengers) they wouldn't be standing on the streets. If these guys and gals had been offered the hope of a better future in their villages they wouldn't have trekked all the way to Accra to hustle. They would have stayed in the hamlets, tilling the land to fend for themselves.

But they have been forced by circumstances to hustle on the streets and they should left alone. The pointless harassment of the hapless hawkers should stop and soon. Until government creates conditions that give them hope and alternative livelihoods, no one has any justification for hounding them off the streets. Government should be thankful that these young men and women have not taken to crime and have decided to make a living for themselves by hawking.

Under the circumstance, therefore, the central business district is where the hawkers should be. You chase them out of that area and they move to places we don't want them to be. You destroy their small businesses and you force them into ventures that cause all sorts of problems for the society. They would go into armed robbery, prostitution and all other sorts of criminal activities that will create a greater nuisance for us all. The social cost of the so-called decongestion exercise is, therefore, worse than the minor inconvenience of the hawkers' presence on the pavements.

Even if there was a compelling reason to get the hawkers off the streets, it would make no sense for Mr. Vanderpuije and the AMA to go chasing them away without making alternative arrangements for them to continue earning a livelihood. No such arrangements have been made. All the AMA and the supporters of the decongestion exercise can point to is the so-called 'Pedestrian Shopping Mall' – tucked away in the back alleys of the Kwame Nkrumah Circle. That “mall” (whoever decided to call it so needs to have his head re-examined) cannot contain a tenth of the vast number of traders in the central business district. To make matters worse shoppers don't like to go there and so the few traders who were allocated stalls there have also decided to go where the shoppers go – the pavements.

The presence of the hawkers on the pavement is a problem. Granted. But this problem cannot just be chased away with batons. What is needed is a coherent plan to contain it. At this stage the best the AMA can do is containment.

Containing the hawkers means designating special areas in the city for them to earn the keep. The central business district should be the first of these areas. Add all the other big markets in the city and move all the hawkers there. Force them to remain there and tell the whole world that there are specified bustling market centres in the city where everyone can go and buy whatever they want. Those who go there will be well advised to park their cars in designated areas (like the car park on the high street) and walk.

After this has been done, it will be very easy to deal drastically with hawkers who have invaded places like the Oxford Street in Osu and the Circle-Avenor stretch, which has been taken over by motorbike sellers.

It's hard to see the sense in the AMA chasing hapless hawkers from Makola and its environs (where they should be because it's a market centre) whiles the streets of Osu and Avenor have been invaded by people who shouldn't be there. Shouldn't the AMA be rather forcing the people in places like Osu to move to the market centres?

This whole decongestion exercise has not been very well thought-through. And that's why it will fail.
Decongestion – as is being done now – will also fail because the ruling party cannot live with the political consequences. The pigheaded gentleman who started it all – Nii Adjiri Blankson – started without thinking about how it will affect the political fortunes of his party. They paid dearly for it.

The NDC will not like to suffer the same fate and so I do not believe those in the party who say that they would rather take unpopular decisions and lose power. In fact, a lot of people support the exercise. It's a popular exercise with the price tag of an unpopular one. They can pretend all they want but the NDC cannot afford to pay the price and very soon someone higher up in the pecking order will call up the mayor and tell him to either put the exercise on hold or give up completely. We've seen it before and it will happen again.

The decongestion will also fail because neither the city of Accra nor the central government has what it takes to keep the hawkers off the streets. Right now in the central business district, there are no hawkers on the pavements. They have been replaced by baton wielding officers drawn from the fire service, the police and the AMA's own corps of city guards. Very soon the fire service will want it personnel back to do what they are supposed to do – putting out fires. The police officers are also needed to check and investigate crimes. The AMA doesn't have the money to train enough city guards to keep the hawkers off the pavements. Soon the 'forces' who have been chasing the hawkers will run out of steam and the pavements will be just like Adjiri Blankson left them.

So the whole point of the decongestion exercise is lost on me. Does the mayor want to sleep on the pavements of Makola? This exercise – like the ones before it – has failure written all over it. Mr. Vanderpuije will soon find out. And he'd be as disappointed as those before him.