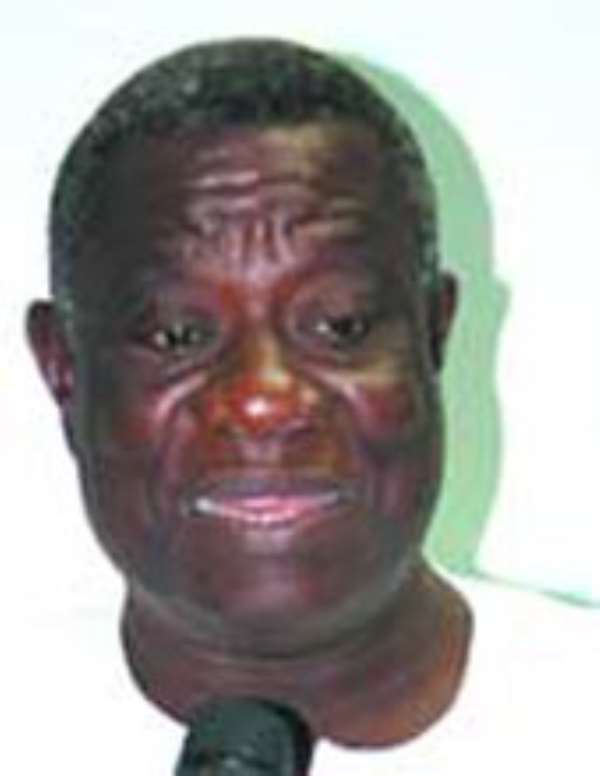 PRESIDENT JOHN Evans Atta Mills has lamented that he and his National Democratic Congress (NDC) government came to power to meet empty state coffers left behind by the Kufuor administration. “We came to meet what we did not expect,” he said.

The President said while in power, the New Patriotic Party (NPP) government led by former President John Agyekum Kufuor made Ghanaians believe that the economy was resilient, but they knew that was not true.

Addressing a grand durbar of the chiefs and people of the Upper East Region in Bolgatanga to climax his two days visit to the region, President Mills said instead of telling Ghanaians the real economic situation of the country, the NPP rather deceived Ghanaians that the economy was robust when in the actual sense it was collapsing.

According to him, it was good that the NDC told Ghanaians where they had taken over from, and where they would be taking them to. President Mills said though his government had cause to express its concerns about the mismanagement of the economy by the NPP, the onus lay on him to rebuild the economy to benefit the people.

In order for the government to rebuild the economy, the President categorically reiterated that the Kufuor administration would at all cost account for its stewardship through the due process of the law.

“The fact that the NPP was booted out of power does not mean that they should not account for their stewardship,” the President stressed.

He reminded his critics that his tenure of office was four years and not four or six months, so his government should not be assessed, based on the few months in office, but at the end of the four years.

President Mills wondered why after eight years in power, the NPP could not improve upon the lives of Ghanaians, but had taken a strong stand in criticising his government for not doing well, when they were only in power for five months.

He reassured Ghanaians of running an open government under his leadership, by way of investing in the people, providing quality and affordable education, and building a robust economy.

The President assured farmers in the country that the government would release fertilisers on time with a 50% subsidy, to enable them go into early farming.

Welcoming the President to the durbar grounds, the Regional Minister, Mr. Mark Woyongo, expressed gratitude to him for giving the region a fair share of the ministerial appointments.

This, the Regional Minister noted, demonstrated the President's commitment to fulfilling the requirements of the Fourth Republican Constitution of Ghana, and the NDC manifesto, which sought to ensure regional and gender equity in the areas of appointment to the high offices of the land.

Mr. Woyongo told the President that the construction of a mini barracks at Bazua, near Bawku, with funding from the Bawku Municipal Assembly, the Regional Coordinating Council, and other assemblies, had come to a halt due to inadequate funding.

The construction of the barracks was to build the confidence of the people in Bawku in particular, and the region at large, so as to avert any future breaches of the peace.

The Regional Minister therefore appealed to President Mills for a special fund to be allocated for the completion of the project.

He also appealed to the President to improve the state of some infrastructural facilities such as the urban roads, office and residential accommodation, which were in a bad state of repair, to give a face-lift to the regional capital, as the region marks its 50th Anniversary in September next year.

On behalf of the chiefs and people of the region, Mr. Woyongo thanked the president for taking the bold initiative to address the yawning development gap between the South and the North by establishing the Savannah Accelerated Development Authority (SADA).

He was optimistic that SADA will identify and harness all the economic potentials of the savannah areas of Ghana for development. This initiative would stem the tide of the migration of the youth from the north to the south in search for menial and sometimes non existing jobs.

The minister for Defence, Lit. Gen. (rtd) Joseph Smith, charged the youth to be prepared to face the responsibilities of the future by analyzing the statement that; “the future belongs to the youth”.

Some government officials who accompanied the president on his visit included the NDC General Secretary, Johnson Aseidu-Nketia, Albert Abongo, Minister for Water Resources, Works and Housing, Deputy Minister for Agriculture, Yaw Befi, a minister of state at the presidency, Alhassan Azong, and Mahama Ayariga, presidential spokesman.