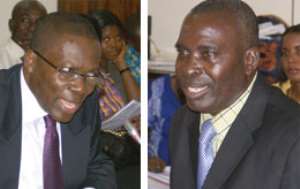 They were apprehended in the wee hours of March 23rd this year, following a tipoff by a court bailiff who lives with the accused persons.

The informant, Mr. Tsetse, told The Chronicle that the duo had attempted to steal another consignment of 20 cartons of drugs and non-drug products, when the alarm was raised. “The driver (Francis Odoom) came home on that faithful night with the hospital's Toyota car, with registration number GT 2723 P, to offload the goods. Unfortunately, I drew the attention of one of the health staff members in the same quarters, to what had been happening in the area. I called Peter Prince Nokoe to join me to cause the arrest of the driver, who had constantly been engaged in transporting these stolen items to the house during night duties,” he submitted.

Mr. Tsetse told The Chronicle that whilst they were still in contact with the police, the driver quickly rushed to call the lady accomplice, Gladys Acquah, to come and plead with them to stop reporting to the police.

He said when they resisted, the accused persons hurled insults at them.

He said all efforts to get the police to corporate in the prosecution of the alleged thieves proved futile.

He told The Chronicle that the management of the hospital also failed to contact him in the course of their investigations, but only invited Prince Nokoe, the principal witness, to testify before a five-member committee setup by the hospital authority, and chaired by Dr. John Eghan.

Mr. Nokoe, the witness, confirmed to this reporter that he was invited by the committee to state his side of the story, which he did.

He said he was however shocked when he later had a letter from the same fact-finding committee, warning him to distance himself from the case, and never to report to the police again.

The Chronicle intelligence sources at the police station and hospital, confirmed that the management had demanded from the police that the matter be settled internally at the hospital, therefore their investigation be halted.

But, the whistleblower says he does not understand why the police should throw professionalism aside.

As such, he is fuming with rage, and calling on the Inspector General of Police (IGP), Mrs. Elizabeth Mills Robertson, the Minister of Justice and Attorney General (AG), Mrs. Betty Mould-Iddrisu, to intervene in the matter and compel the police to continue with the investigations.

He is also asking the AG and the IGP to cause the prosecution of the culprits, since according him, the case was a gross violation of public service conduct.

The District Police Crime Officer, DSP Dela Dzanfi, would not listen to this reporter when he was contacted, saying, “I say contact the PRO, she speaks for the police,” he yelled at this reporter.

One Comfort, of the market circle police station who effected the arrest of the two alleged criminals, also directed this reporter to Chief Inspector Duah, said to be in charge of the investigation, but surprisingly, he also directed the reporter to contact DSP Dela Dzanfi, who had refused to talk about the case.

All these police officers denied knowledge of the case, but later admitted, on record, that something of that sort had come to their attention.

The police Public Relations Officer (PRO), Olivia Adiku, when contacted, said the police officers refused to speak to this reporter because it was too early for them to be talking about the case.

The Medical Director of the Hospital, Dr. Kwaw Ntodi, also confirmed the incident, but denied any attempt to cover-up. “Nobody can bend the rules,” he pointed out.

Dr. Ntodi said the Regional Director of Health Services, Dr. Linda Otoo, had been informed, and that investigations were still underway.

He further stated steps so far taken by the hospital to get the right thing done. According to the Director, stealing was one of the major offences in the health sector.

“Theft, embezzlement, fraud and any situation of negligence, leading to financial loss to the service, can call for the dismissal of a person involved, especially if a committee of enquiry indicts the person for the offence committed with facts,” he underscored.