CPP Rounds Off With Jamboree 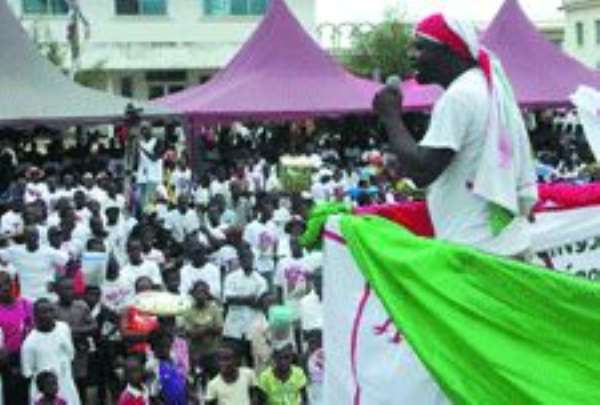 The Convention People's Party (CPP) yesterday held a national youth rally and a musical jamboree at the Chapel Square in Cape Coast to round off its electioneering for the 2008 general election.

The rally was attended by hundreds of youth from across the Central Region and the country. Adorned in T-shirts  bearing the photograph of the party's presidential candidate, Dr Paa Kwesi Nduom, the youth sang and danced as the programme progressed.

As the procession sang through the streets of Cape Coast, the popular “Yeresesamu” slogan of the CPP was the message they echoed.

Musicians invited to spice up the event included popular artistes such as Akatakyie, C-Zar, Lucky Mensah, Kwaw Kessie, Barosky and X-Doe. The police were also on hand to provide security.

“Today we will show to Ghanaians that the CPP too has a strong youth support base. Come Sunday, we will vote massively for Dr Nduom to become the President of Ghana,” one charged youth supporter was overheard saying.

According to Mr John Ecroo, the  President of the University of Cape Coast (UCC) branch of the Tertiary Education Students Charter (TESCHART) of the CPP, the youth wing of the party in the various tertiary institutions, the youth rally was to demonstrate to Ghanaians that the party was no longer for the old but the young as well.

He said there were thousands of young supporters of the party in various tertiary institutions, adding that the rally had demonstrated that the youth were behind the party.

Speaking at the rally, the Campaign Strategist of the CPP, Mr David Ampofo, told the youth that the party was for good and that they should not allow themselves to be deceived.

The CPP, he said, had a silent majority, adding that the youth should go out on Sunday and vote for the party.

The Youth Organiser of the party, Mr Kojo Adu Amarh, charged the youth and Ghanaians in general to vote for the CPP at both the presidential and parliamentary polls.

He said the National Democratic Congress (NDC) and the New Patriotic Party (NPP) had had their turns and that it was time for the CPP to be given the opportunity to rule again.

He said it was also time for people in the Central Region to vote for their own, since no president had ever emerged from the region.

Dr Nduom, who began his campaign with the message of providing more jobs to put money in the pockets of Ghanaians, ended the campaign with a call on Fantes to vote for their kind.

He said as Akyems rooted for Nana Akufo-Addo, it was high time Fantes voted for a Fante, adding that it was critical for Fantes, especially Prof Mills, to lend their support to him to win the election, since he was younger and better placed at the present time.

According to him, Prof. Mills would be made the Chairman of the Council of State when he (Dr Nduom) was elected into office, adding that he would constantly consult President Kufuor and former President Rawlings on national issues.