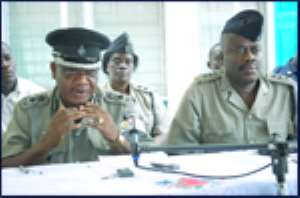 Deputy Commissioner of Police (DCOP) John K. Kudalor, the Tema Regional Police Commander, on Wednesday explained that Abdul Hakeem Annan Darpoh, the estate developer who was gunned down by a Prampram Police patrol team on July 17 at New Dawhenya near Tema, defied Police orders to lay down his weapon.

Addressing a press conference, DCOP Kudalor said the night before the dawn of the shooting, four policemen from the Prampram Police Headquarters, in service vehicle with the number GP1277, received a distress phone call while on night patrol from a victim concerning series of robbery attacks around New Dawhenya.

He said the patrol team immediately proceeded to the location as directed by the caller and that led the Police to the victim's home.

The Police, on reaching the victim's home, mounted a search for the robbers within a thicket around the house.

He continued that a young man informed the Police that he saw the robbers enter a bush with their booty.

The young man later led the Police to the place where he claimed the armed robbers were hiding, and there, the Police came across three young men having machetes and sticks.

DCOP Kudalor indicated that the Police ordered them to lie down; two of them complied but the deceased, Abdul Hakeem Annan Darpoh allegedly defied the order and started walking towards the Police with a machete in hand.

He said the Police saw this as an intended attack on them and therefore fired at his legs.

The DCOP continued that the Police then took the machete from the deceased and his colleagues and arrested them with a woman suspected to be their accomplice.

He said an amount of GH¢500 and four mobile phones were also found on them.

The deceased, he stated, was immediately rushed to the Tema General Hospital where he was admitted at the Accident and Emergency Centre for treatment while his colleagues were detained at the Prampram Police Station for investigations.

Annan Darpoh, 33, was said to have died the same day at about 4:30pm, and his body deposited first at the Tema General Hospital Morgue but was later conveyed to the Police Hospital morgue in Accra.

According to the DCOP, the three suspects, in their caution statements, denied being armed robbers and intimated that they were also responding to the distress call by victims of the robberies which was why they carried the machetes with them.

The suspects as well denied that the deceased was an armed robber.

DCOP Kudalor continued that on July 19, the Regional Crime Officer together with the Crime Scene Team from Tema re-visited the place and were shown a spot behind the Bethel Assemblies of God Church, New Dawhenya, where the incident took place.

He said blood stains and an AK 47 spent shell were found at the scene and photographs taken.

“Further investigations later revealed that five different families at different locations on the same day were robbed and various items stolen from them, and investigations are ongoing to know the details of the robberies.”

However, colleagues and relatives of the deceased vehemently refuted the claims by the Police, saying the deceased and his colleagues were called to fight the robbers who had invaded the area, adding that the deceased was well known.

DCOP Kudalor indicated that those detained were released as the relatives had planned to attack the Prampram Police Station.

He gave the assurance that the issue was being investigated and that the appropriate action would be taken.

Earlier, a student journalist of the Ghana Institute of Journalism (GIJ) narrated to the media how he was abducted and robbed of an amount of GH¢800 and his car snatched by unknown men.

The student said on July16, he went to the Sakumono branch of The Trust Bank to withdraw GH¢800, and just before entering the bank premises he spotted a green unregistered Geo Prizm saloon car.

While driving home after withdrawing the amount, he saw a car that looked similar to the one he had earlier seen parked in the middle of the road a few metres from a gas filling station at Sakumono.

Thinking the car had broken down, he tooted his horn thrice and just then, a well-built man emerged from the car to his and explained to him that the driver of car was an inexperienced driver.

The man then sat in his (journalist's) car as he apologised and suddenly, he pulled a gun and ordered him not to move, threatening to shoot if he did.

At that point, the so-called inexperienced driver also joined them in the car with a revolver and ordered the victim to drive towards the Tema Beach Road while their car was driven by another person.

On reaching a Police checkpoint on the beach road, the two men told the victim to ignore the Police if asked to stop, but fortunately for the robbers, the Police did not stop the car.

Continuing, he said the robbers again ordered him to drive towards the GHACEM factory area and not make any noise or he would be shot.

He said he continued to drive until they got to a place around Tema New Town where two men later arrived in the green saloon car with one of them holding an AK47 rifle.

He indicated that he was asked to get out of his car and join the two men in the green car together with his captors and the money, while his car was driven by two other persons he claimed he did not see earlier.

He told the press that they drove to a cemetery which he later got to know was the Kpone Cemetery, to wait for one Gambo who was to deliver some weapons to his captors.

While waiting, one of the captors collected his mobile phone which had a little girl's picture as the wallpaper. He was asked who the girl in the picture was and he replied that she was his daughter.

At that juncture, they told him to give them GH¢10,000 if he wanted to see his daughter again; an amount he said was too much for him to raise.

He was then asked to call someone who he thought would be able to help raise the amount, so he decided to contact his wife and even with that, he was given a new MTN chip to slot in his phone to make the call.

He said because of the robbers' presence, he could not tell his wife more about the situation, and only told her that he had been abducted and the said amount was to help him gain his freedom.

He later called his brother because his wife said she could not raise the amount which was supposed to be collected at the cemetery.

According to him, his wife had then reported the case to the Police who were helping her to trace the robbers and her husband.

The robbers, he said, spoke Frafra, which he understood and therefore got to know from their conversation that their guns did not even have bullets.

He stated that he then devised a plan and told the guys he wanted to urinate and they pointed at a spot for him to do so.

The student journalist indicated that he then hit one of the guys who was closer to him in the groin and he fell down, and then he hit another one who was approaching him, who also fell down.

He then ran through the cemetery until he came to a road where he stopped a taxi whose driver declined to pick him initially, but later did.

The case is being investigated by the Police.