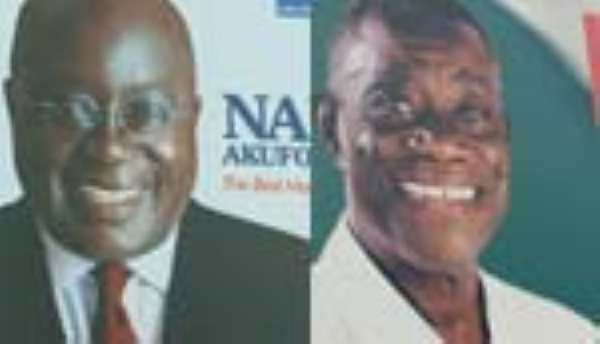 For the first time in the history of the New Patriotic Party (NPP), an overwhelming crowd besieged the streets of Tamale to usher in the flag-bearer of the party, Nana Addo Dankwa Akufo-Addo to the ancient city as part of his three-week tour of northern Ghana.

The crowd, according to observers, was thicker than what the opposition National Democratic Congress (NDC) recorded when its leaders stormed the same venue recently.

His visit, which is his first official one after the December congress of the party, appeared to have emptied all homes in Tamale, a development described by Mustapha Abdul Hamid, Nana's spokesperson as surprising.

Mustapha said he was amazed that in view of the propaganda by NPP opponents, such massive crowd was recorded.

Even before Nana Akufo-Addo and his entourage arrived, the streets of the city were completely choked with both human beings and vehicles.

While those who sought to catch a glimpse of the visitor climbed nearby trees and buildings, others hanged to various objects to do so.

When Nana and his entourage finally entered Tamale at about 3pm, it was all fun.

The jubilant crowd stretched over 11 kilometres to the venue where a rally was due to take place.

The crowd literally swallowed up the flag-bearer and his team, giving the security personnel a hectic time.

Several measures were improvised to enable the security agents control the surging crowd. Despite this, a greater section of the supporters could not gain entry into the Jubilee Park, venue of the rally.

The Vice President, Alhaji Aliu Mahama was among Nana's entourage to the rally grounds.

Alhaji Mahama, who flew to Tamale yesterday to join the campaign, met Nana at the Tamale Central Mosque where they met the Imam and other Muslim leaders in the metropolis.

The entire rally ground was parked to capacity, with all supporters clad in NPP colours.

The venue was thrown into a state of excitement and fanfare when Nana Akufo-Addo and his team were ushered into the rally ground.

Nana, who ended his tour of the Upper East and West Regions, is expected to spend 10 days in the Northern Region. He had earlier held rallies in Walewale, Savelugu and Tampion while on his way to Tamale.

During the outdooring of the NPP flag-bearer at Kasoa, an unprecedented crowd turned up for the event.

So large was the turn-out that like the Tamale one, the security agencies had a hell of time controlling them.

Nana Akufo-Addo told his hosts that he would make Tamale the gateway to the Sahel besides bringing massive infrastructural development to the Northern Region as a whole.

He held his audience spellbound as he narrated his vision for that part of the country when he assumes the reins of power.

One of the highlights of his speech to the people of Tamale was his dream of bringing a fee-free secondary education to the country and the floating of a $1billion Northern Education Fund to cater for the shortfall in education and to support the poor but brilliant.

In the area of agriculture, Nana Akufo-Addo told the people in Tamale that he would transform the North into the breadbasket of the country.

One of the ways to achieve this goal, he pointed out, is to establish a year-round irrigation system in the regions.

He asked the people to shun politicians who preach message of hate.

He is moving to Zabzugu, Tatale and Saboba among other towns tomorrow.

The kangaroo dance which featured prominently during the Kasoa outdooring activity was in full display as Nana and some members of his entourage engaged in the choreography.

President John Agyekum Kufuor noted that in his many years of political life, he has never seen such a massive crowd.

Perhaps overwhelmed by the sheer sea of human heads, Dr. Edward Nasigre Mahama, flag-bearer of the People's National Congress (PNC) described it as a bought crowd.