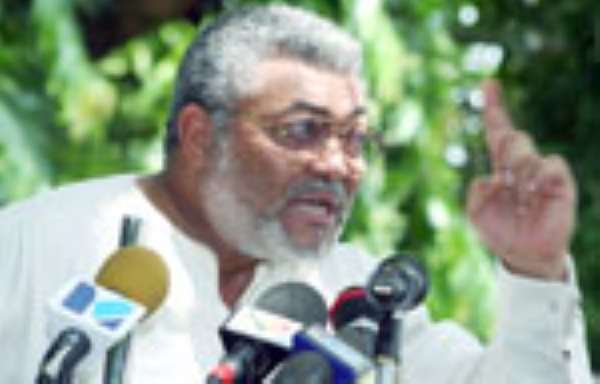 Hon. Kennedy Agyapong, Member of Parliament (MP) for Assin North was one of those who think the former President did not choose his words carefully that day.

"Rawlings is a fool. He is stupid and we cannot allow him to continue to lambaste the government and say all manner of things like that," he fumed.

Speaking on Angel FM, a local radio station in Kumasi, the Assin North MP took exception to the provocative utterances of the former President, saying they were tended to incite minority tribes against the Akans; an attitude he said does not augur well for smooth democratic governance.

Kennedy Agyapong wondered why the former military dictator should continue to express reservations about the incarceration of NDC bigwigs including Dan Abodakpi, Victor Salormey, Tsatsu Tsikata and the murder of Ya-Na without making reference to the jailing of Kwame Peprah.

Being virtually mad about the unsubstantiated allegations Mr. Rawlings made against the Kufuor government, the MP accused the former President of presiding over a regime under which innocent businessmen people and public servants were murdered, beaten and jailed without trial and had their assets confiscated.

“God should forgive the sins of everyone and let Rawlings live long to pay the price of the atrocities he had committed against the people of this country,” Kennedy prayed.

Fuming with rage, the NPP firebrand questioned the moral justification with which the NDC leader could talk about justice delivery in this country when during his violent-run regime, innocent market women were picked up and whipped like stubborn school children.

Reminding listeners about the abduction and killing of over 250 people during the PNDC era, Kennedy Agyapong said “it is my prayer that Rawlings will live long and get paid for all the people he got killed”.

According to him, President Kufuor, the NPP and the good people of Ghana had no time pursuing any legal case against the former President because Rawlings is a bitter person and appears to be hunted by the atrocious crimes he had committed against blameless people.

Analysing the context of Mr. Rawlings' effusions, the Assin North MP deduced that the NDC leader was by his words preparing the minds of the people to enact the electoral violence which rocked Kenya recently.

He called on the listeners especially the Asantes to be wary of the unbridled remarks made by the former military dictator, and appealed to the Asantehene, Otumfuo Osei Tutu II not to tolerate him when he visits Kumasi.

Reminding Ghanaians about a statement made by former US President Bill Clinton, Kennedy Agyapong warned the people “not take the wealth we have built for granted. If you make the mistake of voting for the NDC in the 2008 elections, we will live to regret”.

He further accused the former President of being jealous of the achievements and track record of the Kufuor-led government, which has enhanced Ghana's image in the international community.

Kennedy Agyapong said as a result of the success story of President Kufuor, authorities at international airports including custom officials today treat Ghanaian travelers with relative courtesy and due respect, a feat which Rawlings could achieve for Ghana.

He said Ghanaians are today more awaken and understand the times as well as the democratic principles of governance so they would not allow themselves to be cajoled and influenced by what the NDC 'god' would preach to them.

On Rawlings' criticisms against Nana Akufo-Addo, NPP presidential candidate's intention of increasing the number of police personnel in the country if he is elected president, the MP said the former President was daft in the management of police force.

“Where did he get his calculations and figures from? He is too daft,” he said, adding that all over the world, countries recruit police personnel based on the size of the population of the citizenry.

According to Kennedy, Rawlings appears not be well educated in the administration of Police Service which is why during his tenure as a head of state, he abandoned the police and used military personnel to govern thereby instilling fear in the people.

He explained that Nana Addo's vision of wanting to recruit 25,000 more police personnel to ensure effective law and order in society also aims primarily at creating more employment opportunities for the youth of this country devoid of any ethnic or religious considerations.