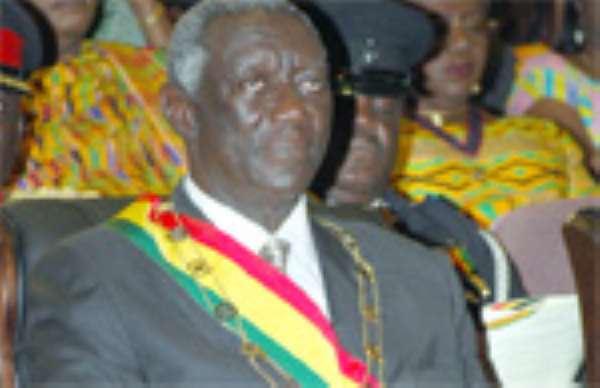 The unnecessary hullabaloo over this year's National Honours was laid to rest yesterday after the enactment of the country's most all-encompassing state recognition of achievements.

But for those who declined their nomination and therefore did not turn up out of flimsy partisan reasons, all others graced the fascinating and colourful get-together of sons and daughters of Mother Ghana, in response to the President's invitation.

Indeed the absence of the Master Killjoy and his cohorts was not even noticed as the representation of the cream of Ghanaians relished every bit of the occasion.

The intention of those who did not turn up was to take the shine off the occasion. Unfortunately, that was not to be as the reverse was the order of the occasion.

A deliberately broadened list to capture all walks of Ghanaian lives, from comedians to medical doctors, cannot be described as flimsy.

We were fascinated by the sheer amalgam of the varied faces of Ghanaians who received state recognitions.

We noticed a certain sharing of the momentous occasion by politicians, security personnel, media personnel and others, all for the love of the Motherland.

As we did, we could not resist wishing for a Ghana without a deranged and hallucinating person who is wont to jumping on the rostrum in the garden of his house and telling us that the country is doomed.

We are moving on with little or no time to listen to such persons who should have been attending the clinics of a psychiatrist.

President Kufuor has set the pace and there is no doubt in our minds that the trail would be blazed by others to come.

The highest honour which was re-engineered by the President needs explanation beyond the cynics' spin.

We consider the re-engineered award as recognizing only those who assume leadership through the ballot box, and therefore giving impetus to democracy and scorning military adventurism.

This way, we are increasing the gap between us and mutinies.

Those who think such a move should be spat upon, we are afraid, are just being mischievous so that they can chalk some cheap political points.

President Kufuor's gesture in reconciling the nation was displayed in the compilation of the list of awardees.

Only a few in his shoes would have been so magnanimous in the distribution of state honours.

He bent backwards and extended the honours to even those whose hands drip with the blood of their compatriots, even as his supporters and others cried foul.

He ignored them and went ahead for the simple but important sake of reconciling the nation.

Diabolic as they are, these persons declined the nomination, to the relief of many Ghanaians however.

President Kufuor explained it all when he said that the nomination was intended to correct the anomaly around the annual celebration of the Republic Day.

For somebody however, the Republic Day was the best on which to speak rubbish and nonsense to his fellow citizens.

The confidence reposed in Ghanaians in all fields of human endeavour by the enlarged list of honour recipients will go a long way in enhancing productivity and creativity.

Bravo, Kufuor and awardees; but shame unto the killjoys.