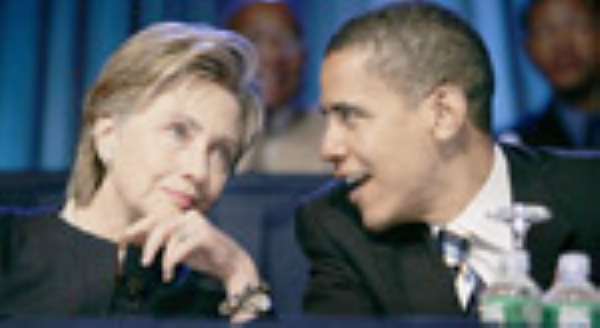 Barack Obama has scored a clear win in the Democratic presidential primary in North Carolina, while Hillary Clinton has narrowly won the Indiana primary.

Both votes were the final major Democratic primaries which help decide the party's White House candidate.

Mr Obama is leading the race in delegates who will chose the presidential nominee by 1,840 to 1,684, according to the Associated Press news agency.

Campaign controversy
Speaking to a raucous rally in Raleigh, North Carolina, Mr Obama said: "Tonight we stand less than 200 delegates away from securing the Democratic nomination for president of the United States."

He has been dogged by controversy over his gaffe that small-town residents were "bitter", and racially charged comments by his former pastor, Reverend Jeremiah Wright.

A win in Indiana was seen as critical for Mrs Clinton to stay in the race to stand against Republican John McCain in November's presidential vote.

At her election gathering in the Indiana state capital, Indianapolis, she told cheering supporters it was "full speed on to the White House".

But despite her defiant words, Mrs Clinton seems to have lost some of her trademark fighting spirit, says BBC Washington correspondent Jonathan Beale.

The rivals, courting voters suffering from an ailing economy, spent recent days sparring over Mrs Clinton's proposal to suspend the federal petrol tax for the summer.

Mid-western Indiana is home to large numbers of blue-collar workers, a bloc which has backed Mrs Clinton in previous contests.

According to exit polls conducted for AP, about two-thirds of white voters in both states who had not completed a college education supported Mrs Clinton.

Mrs Clinton won 58% of non-black voters in the state, according to the polls.

Because the race is so tight, nearly 800 super-delegates - senior party members - will have the final say at the party convention in August.

Many super-delegates says they will vote for the candidate chosen in the primary of their home state.

The Republicans also held primaries in Indiana and North Carolina on Tuesday, but the votes were largely symbolic as Senator McCain has effectively secured the nomination. BBC