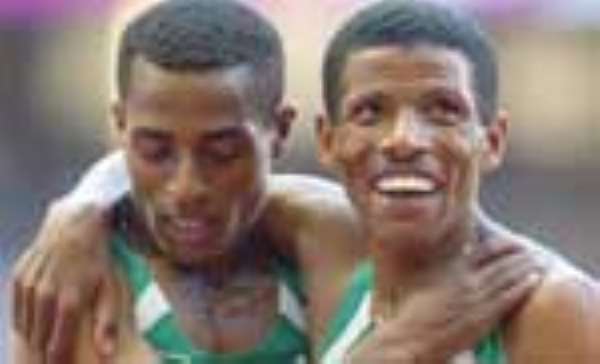 The athletics version of the Africa Cup of Nations began in Addis-Ababa, Ethiopia, on Saturday without the glamour and media attention that the football event attracts.

For a continent that parades some of the best athletes in the world in all events, this is sad. Whereas everything stops in most African countries when the football championship begins, only a few Ghanaians are aware that the Africa Athletics Championship began on Saturday in spite of the fact that the nation's athletes such as Eric Nkansah, Seth Amoo, Vida Amoo, Esther Dankwa, Gifty Addy and Elizabeth Amolofo are poised to win medals at the championship.

The bane of athletics in Africa has been the absence of visionary leaders who will market the good brand well and attract the necessary media attention that will bring huge followership.

Away from the problems of the sport, this 16th edition of the tourney, which runs till May 4, is expected to attract over 1,200 athletes from various African countries.

According to the national Local Organising Committee, 41 African countries have so far confirmed their participation in the event, and more athletes are still being expected.

The committee said that the athletes would participate to get their medals in 38 different sporting disciplines, which will attract the best athletes, both in the long and short distance races as well as in various other sports.

Ethiopia, which is hosting the tourney for the first time, has finalised preparations to welcome athletes to Addis Ababa, (which is regarded as the African capital), being the seat of the African Union Headquarters and many other international organisations and embassies. Head of the International Association of Athletics Federation (IAAF), Lamin Diac, and Africa Athletics Confederation (AAC) Hamad Kalkaba Malboum, expressed satisfaction with the host.

African record holder, Fasuba, will lead Nigeria's drive for medal. The All Africa Games champion is the tourney's 100 metres defending champion and is tipped to become the first sprinter in the history of the championships to win the title three consecutive times.

Fasuba won the title in 2004 and 2006 to equal the back-to-back feat set by the trio of Ernest Obeng of Ghana and Nigeria's duo of Chidi Imoh and Seun Ogunkoya.

Ghana's Vida Anim, who lost to Osayomi at the Africa Games last year, will be spoiling for her pound of flesh. She beat back-to-back winner, Nigeria's Endurance Ojokolo, to win the title in 2006. Also, South Africa's Constance Mkenku, who won the silver medal behind Osayomi in Algiers, will be hoping to go one step further than she did in Algiers.

The Africa event will indeed provide a good warm-up for August's Beijing Olympics. The Technical Director of the Ethiopian Athletics Federation, Dube Jillo, told Reuters: "All of our internationally-tested athletes are expected to win gold medals in their respective fields. It'll also serve as a test of endurance for our athletes to be selected for Beijing."

World champion, Tirunesh Dibaba, will compete in the 10,000 metres women's event, while the 5,000 metres squad includes Meseret Defar - the Olympic and World champion at that distance.

Ghanaian athletes have indicated their preparedness and zeal to bring a lot of medals home.

The 28 athletes who left Accra for Addis Ababa last week, were accompanied by seven officials including the Chief Administrative Officer of the National Sports Council (NSC), Charles Ayeh and Sandy Osei Agyemang, Chairman of the Ghana Athletics Association (GAA).