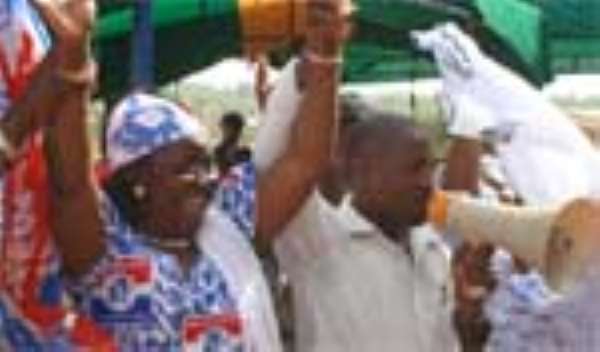 At the close of nomination early this month, the party had the sitting Member of Parliament (MP) as the only person who had filed to contest the seat, thereby making her an automatic parliamentary candidate for the constituency on the ticket of the NPP.

In 2000, Hajia Alima Mahama, though was elected unopposed by the party, could not win the seat; she however won it in 2004.

The Women and Children's Affairs Minister, in her acceptance speech, commended the delegates and all other NPP members in the constituency for the confidence reposed in her.

She promised to work hard to bring more development projects to the area, saying she would also table concerns of constituents on the floor of Parliament for a fruitful discussion.

The MP, whose name appeared on the list of possible running mates to Nana Addo Dankwa Akufo-Addo, appealed to parents in the area to take the education of their children, especially the girls, very seriously.

She expressed dissatisfaction about petty misunderstandings among some members of the party in the constituency, and called for an amicable solution to such disputes.

She had earlier called on the King of the Mamprugu Traditional Area, Nayiri, Na Bohagu Abdulai Sheriga, where she pledged her continuous support to the development of the traditional area.

In a solidarity message from the Upper East Regional Director of the Department of Women and Children, Paulina Abayage asked women not to despise politics but get themselves involved to enable them participate in the decision making process of their areas.

She appealed to chiefs and other traditional leaders to do away with outmoded cultural practices that impede the development of women and girls, saying such practices dampen the spirits and talents in them.

She prayed that the electorate would maintain the sitting MP to enable her continue her good works for the area.