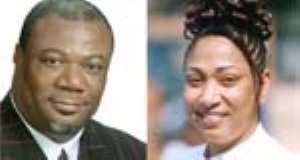 AFTER OPTING for an out-of-court settlement on the divorce case with his wife Francisca, the General Overseer of the Christian Action Faith Ministries, Archbishop Nicholas Duncan-Williams, has gone back to court to seek custody of their children.

The Accra High Court Judge, who is presiding over the divorce proceedings in-camera, has consequently asked both parties to submit their respective written submissions on the matter.

A source close to the couple revealed that they had almost reached a compromise on the divorce issue when Archbishop Duncan-Williams went back to court to seek custody of their two teenage boys who are residing with their elder sister, also called Francisca, in the United States of America.

The couple, who have been married for about 27 years, have four children including two grown up girls domiciled abroad who openly supported their father's decision to divorce their mother.

According to the source, Duncan-Williams probably wants custody of the children before any final deal could be reached on the divorce package for Mrs. Duncan-Williams, also a pastor, who helped him build the Ministry that now has branches worldwide.

Mama Francisca, as Mrs. Duncan Williams is affectionately called, is reportedly fed up with the way the whole divorce issue was going on and was eager to get things done and over with, and had left everything in the custody of her lawyer, Mr. Ken Brookman- Amissah.

The couple first separated around 1999 but Bishop T. D. Jakes of Potter's House Ministry in Virginia, United States, managed to reunite them after months of meticulous counseling.
They separated six years later in 2006.

The Archbishop shocked his congregation and all Christians alike when he suddenly announced in 1996 that he and his wife had separated but still remained friends, disclosing no further details except that he had done all he could to salvage his marriage but to no avail.

However after several attempts by Christian Ministers to bring them together, he reportedly told his wife to go on a vacation abroad with all expenses paid, and sent his lawyer, Mr. Bram Larbi to initiate the divorce proceedings.

When Mama Francisca heard of his plan, she quickly cut short her holiday and returned amidst tears to beg her husband not to divorce her, but her plea fell on deaf ears.

All this time, pressure was mounting on the Bishop among Christians to come out and openly explain on what grounds he had decided to end his then 25 years of marriage since the Bible was against divorce.

The elder daughter of the couple, in an interview with Joy FM, an Accra-based radio station, made all kinds of allegations against her mother, whom she accused of being bossy and always looking down on her father.

She said she and her siblings could no longer stand the humiliation meted out to their father by their mum, so they were fully behind their father in those trying times.

A few months after the divorce proceedings had begun, he sought an out-of-court settlement with his wife and everything was reportedly going on well till now.