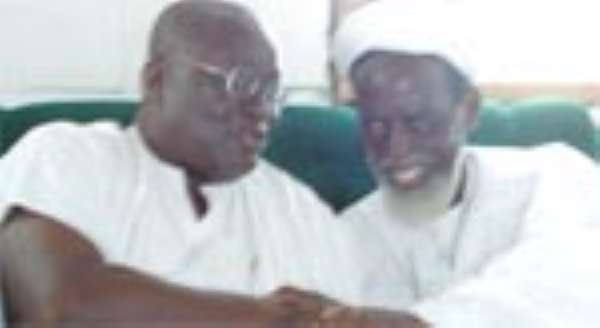 THERE WAS pandemonium yesterday at the residence of the National Chief Imam, Sheikh Usman Nuhu Sharabutu, when the presidential candidates of Ghana's two leading political parties paid separate but closely-spaced visits to the cleric's palace at Fadama, a Moslem community in Accra.

As a subtle but tactical campaign strategy, Nana Addo Dankwa Akufo-Addo, presidential candidate of the ruling New Patriotic Party (NPP) and Professor John Evans Atta Mills, flagbearer of the opposition National Democratic Congress (NDC) had both gone to the Chief Imam's palace in observance of the celebration of the birthday of Holy Prophet Muhammed, which falls today Saturday.

As a result of the visits, the serene and sacred palace of the religious leader was plunged into chaos and disorder by supporters of both parties who had in the early hours of the day trooped to the place to catch glimpses of their party leaders and cheer them on.

So serious and threatening was the commotion that six Police jeeps filled with armed security personnel were dispatched to the place to prevent the clash from degenerating into a bloody riot.

A man suffered a bleeding nose and the Police, in numerous but separated instances, had to step in to prevent people from getting physical.

When Prof. Mills, his entourage and supporters arrived at the Palace a little after 11:30 am, supporters of the NPP had already pitched camp, waiting for their leader.

Supporters of the two parties started to violently accuse each other of wanting to foment trouble, thus deliberately coming to the palace at a time they were not supposed to be there.

After calling on the Chief Imam, the NDC delegation and their supporters left to attend a mini rally in the constituency.

Nana Akufo-Addo and his delegation arrived not too long afterwards to a well-organised welcome probably meant to overshadow what Prof. Mills had.

The real trouble started after Nana Akufo-Addo had parted company with the Chief Imam and was leaving the palace.

The NDC supporters attempted to prevent Nana Akufo-Addo from entering his car as they booed and screamed their heads off with shouts of “cocaine, cocaine”, “Nana Talk Tax”, “Nana no water”, “Nana Presidential Jet” and some vulgarisms.

It took the combined efforts of Nana Akufo-Addo's body guards and the police to get the NPP's candidate into his vehicle as the police desperately pushed aside the enthusiastic crowd.

Alhaji Gado Muhammed, spokesperson for the Chief Imam told DAILY GUIDE that as at Thursday evening when he was leaving the office, the arrangement was for Nana Akufo-Addo to get to the Chief Imam's palace by 10:30 am and Prof. Mills, 11:30am.

He said the clash was not deliberately planned and that wrong information might have been given to Nana Akufo-Addo's team.

Nana on his part thanked the Chief Imam for inviting him to join in the birthday celebration of the Holy Prophet.

He said he was there on the eve of the ceremony because he would not be in Accra today, but had asked the Greater Accra Regional Minister, Sheikh I. C. Quaye to represent him.

Nana Akufo-Addo donated to the Chief Imam a cash amount of GH¢2,000 and 20 bags of rice.

Also in the entourage was the Minister for Women and Children's Affairs, Hajia Alima Mahama; MP for the area, Elizabeth Sackey; Alhaji Fuseni Meiga of the NASARA Club, and other leading NPP members.