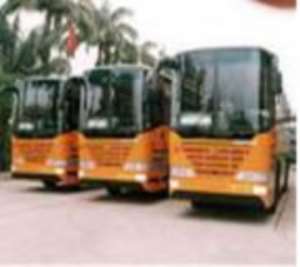 
Two Metro Mass Transport (MMT) drivers, on Wednesday, appeared before a Magistrate's court at Breman Asikuma, for allegedly siphoning diesel from the bus they were working with.

Alex Ofori, 29 and Alex Afful, 42, pleaded not guilty to stealing and the court, presided over by Mrs Cynthia O. Hammond admitted the two drivers to bail in a total sum of GH¢100,000.

The accused persons would reappear on April 3, 2008.

An accomplice, Kwasi Adu, a resident of Brakwa, has absconded.

Presenting the facts of the case, Police Inspector John Akuetteh told the court that on March 10, this year an MMT inspector had a tip off that the drivers were siphoning diesel from the fuel tank of the bus.

Inspector Akuetteh said the bus inspector conducted his investigation and when he ascertained the fact, he made a report to the police, who arrested the drivers.

According to the Prosecutor, based upon police interrogation, the accused persons were prosecuted.