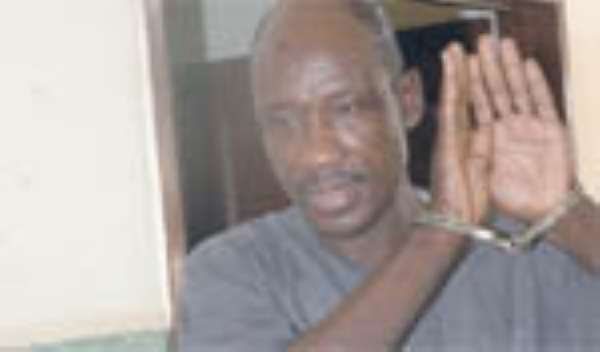 Mr. Thomas Osei, the businessman who rammed his vehicle into the official Mercedes Benz of President Kufuor last November told investigators that he used cocaine to enhance his sexual prowess and also as a pain killer.

One pump-action gun with 52 rounds of ammunition was also allegedly handed over to investigators in the house of the accused person.

DSP Cosmos Allan Anyan, a Crime Scene Officer at the Police CID headquarters revealed these when he appeared before an Accra Fast Track High Court presided over by Justice E.K. Ayebi as a prosecution witness yesterday.

According to the witness, Osei admitted in the presence of a team of investigators who went to his house to conduct a search that he was an occasional user of cocaine and that het got his supply from Accra New Town.

The accused, the witness revealed, removed his shirt to show to the officers a scar he had at his back as a result of a plane crash, and then disclosed that he used cocaine as an aphrodisiac for sexual enhancement as well as a pain killer.

This revelation, witness said, made the investigators request that the accused volunteered his urine for a test when Dr. Brako from the BNI also joined them in Osei's house.

From there, they went to the office of the accused at Djorwulu for further search, but found nothing incriminating. “From his office, we went to Med-Lab for the urine to be analysed. While on the way, Dr. Brako carried the urine. The General Manager of the lab, Johan Berker did the test in his office in the presence of accused, myself, Inspector Agyemang and Mr. Brako and after, the results proved positive for cocaine for which Mr. Berker issued a report to that effect,” he narrated.

Led in evidence by Mr. Edward Agyeman Duodu, the witness said on 14 November, 2007 at about 12 noon, he had a call from his superiors that the President was involved in an accident at Opebia Junction and so he and his team should go to the scene for investigations.

The team, which consisted of a photographer with recorders and fingerprint experts, moved to the scene but found none of the accident cars.
Further investigations led them to the Airport MTTU where they found two cars, one of which belonged to the accused person.

Witness related that a search in the other car revealed nothing but when the accused's car was searched, an Islamic audio recorder, 26 audio cassette as well as 12 pairs of sandals and a check book were found.

From there, they went to the office of the First Lady where the President's damaged car was relocated and took photographs of it.

The next day, November 15, 2007, the team and other security personnel visited the accused at the 37 Military Hospital and when the accused was discharged, they accompanied him to his house for a search, because of the circumstances surrounding the accident, and the personality involved. DSP Anyan narrated that the search was conducted in the presence of accused person's wife, Mrs. Doe.

The investigator said they found a passport with Osei's photograph but bearing the name Johnny Kwame Doe.

Whiles the team was still searching, a gentleman named William Boahen, said to be an employee of the accused, was called by Mrs. Doe and the team was given the pump-action gun with 52 rounds of ammunition.

Before the witness was called, the prosecution, coming under Act 19 sub-clause 15 of the 1992 Constitution, applied that his evidence should be held in camera on grounds that the witness was a BNI officer whose identity must be protected and for the fact that certain part of his evidence would touch on issues concerning national security.

Mr. Kwame Boafo, counsel for accused objected to this by indicating that at the initial hearing, Mrs. Aikins, the Acting Deputy Director of Prosecution prayed the court to remand the accused pending further investigation into the issue. Subsequently, she said the charge sheets should stand as they were as no aspect of national security arose in the matter.

In addition, the accident, according to counsel, occurred in the full glare of the public, arguing that the accused had not been charged with treason.

He argued further that Dr. Brako had also testified without the court covering his identity.

“All in all, no proper foundation has also been laid for the application. First, the defence is not aware of the kind of evidence the witness is going to give and the status of the witness at the BNI. The procedure is wrong; it must be put in an affidavit before coming to my Lord.

“Under Act 125 of the Constitution, it is imperative that justice be administered in the full glare of the public. The mere saying without much more is not enough to invoke the court's jurisdiction in the case, otherwise the prosecution will choose which witness should be heard in closed doors or in open court,” he argued. The judge upheld counsel's prayer and dismissed the application, saying it was a surprise to the court. The judge noted that none of the charges the accused was facing involved security of the state but rather motor and narcotic offences. Moreover, no evidence had been produced by the acting DPP concerning that.

He therefore ordered the continuation of the case with the view that matters of security must be properly laid in affidavit which the prosecution had failed to do.