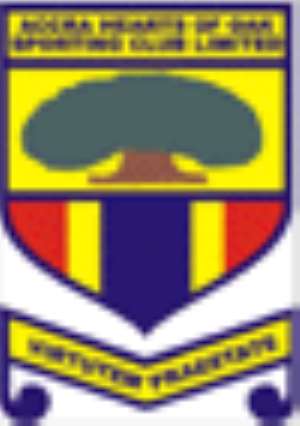 Ghana's Accra Hearts of will begin their Champions League campaign with a difficult trip to Gabon where they will play FC 105 in the preliminary round of the competition next year.

The Ghana league champions will travel face the crack side in Libreville for the first leg of the competition on the weekend of 15- 17 February after the draw by Caf was released on Tuesday.

FC 105 are considered as a tough opponent as they recruit some foreign players from other countries in the continent to augment their squad.

The Phobians will host the Gabonese in Accra two weeks later for the second leg encounter.

Hearts will face another difficult opponent if they manage to eliminate FC 105.

TP Mazembe are one of the biggest clubs in the continent and they have played very well recently, having finished second in Group A of this year's Confederation Cup.

Their striker Tresor Mputu has been targeted by several clubs in Europe including Arsenal, where he spent two weeks on trials last month.

Meanwhile, Ghana's other representatives in the competition Ashgold will travel to Niger to face Sahel FC for the first leg of the preliminary round.

The second leg will be played two weeks later in Obuasi.

Ashgold face a daunting task if they win the tie as they will face Algerian giants JS Kabylie who finished third in Group B of this year's Champions League.

The Champions League gets underway one week after the completion of the African Nations Cup finals in Ghana.