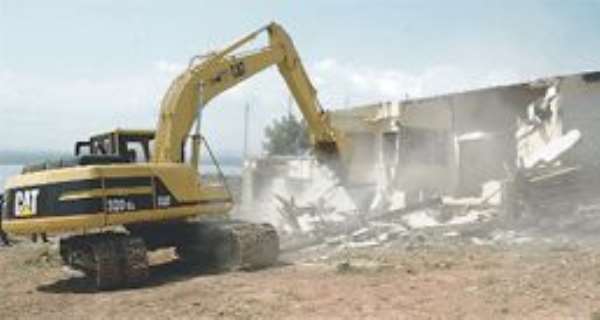 Hundreds of residents of Weija yesterday looked on helplessly as bulldozers and cranes rumbled through buildings at the area in a mass demolition exercise by the Ghana Water Company Limited (GWCL).

With some wailing and others dumbfounded, the affected families watched as their properties went down, barely 72 hours after the announcement by a combined team of the police and the military to reclaim land at the Weija Dam site from alleged squatters.

Under the supervision of heavily armed national security officials, the GWCL had marked out about 2,000 buildings sited within the catchment area of the Weija Dam.

At least three affected residents, including a male, who could not stand the agony of the exercise fell unconscious and had to be whisked away to a nearby clinic and then to the Korle-Bu Teaching Hospital to be resuscitated.

Some of the affected persons wailed, others had their two hands on their heads in grief, while some were visibly shaken and looked traumatised.

Weija, once a peaceful town, has now become an area where residents live in fear and anxiety because they have no idea when the next set of buildings will be razed.

This is because portions of the area where the authorities initially agreed would be spared were not left out of the exercise, a situation which has intensified fear among the people, including the opinion leaders.

The exercise began minutes after the acting Chief, Nii Boafo Danyina Nse II, and elders of the area had completed a news conference, which was also attended by a large number of residents of the area, to calm the nerves of the anxious residents, some of whom had lived in the area for more than 10 years.

Also at the news conference were the Station Manager of the GWCL, Mr Michael Amuakwah, and the Member of Parliament (MP) for the area, Ms Shirley Ayorkor Botchwey, who also appealed for calm while the matter was looked into.

Unfortunately for the residents, immediately they came out of the hall, a large number of heavily armed security men emerged, together with the bulldozers, and headed towards the area earmarked for the exercise.

Ms Botchwey and the assembly member for the area, together with some of the elders of the area, followed up but their pleas for the residents to remove some of their belongings were not heeded.

The residents gathered behind the fence wall of the GWCL, with some screaming at the top of their voices for the authorities to allow them a few days to pack their belongings. But all their pleas did not yield any results.

Some of them agreed that they had built within the catchment area of the company but noted that they would be glad if they were allowed some time to pack out their movable property before the exercise started.

From far and near, they watched the bulldozers flatten what they had built with years of savings. The Daily Graphic gathered that the exercise was scheduled to have started at dawn but because of the intervention of some elders and the MP, the security men who were stationed at the area at 4.00 a.m. had to leave.

However, further instruction from above compelled them to move back to the area to carry out their duty.
By press time yesterday, six fully completed houses had been completely razed, while several uncompleted ones were also being demolished.

There was no official from National Security to officially comment on the exercise but it was gathered that it would go on until all the houses marked had been razed.
Those affected stated that once the exercise had started, “it has to be completed”.

“We are watching,” they said, adding, “We know the big men who have their buildings here with us but although their properties also fall within the catchment area, they have not been marked and we are watching.”

“If National Security does not demolish those buildings, we will do it for them because we will not allow ourselves to be cheated,” some of them said.

Some of the residents had alleged that one of the huge buildings sitting on top of a hill around where their properties were demolished belonged to the Greater Accra Regional Minister, Sheikh I.C. Quaye, and asked that “it should also go because all the buildings around it were marked”.

Earlier at the news conference, the MP had said the matter was being heard at high places and appealed for calm.
She said some of the buildings which were within the catchment area would not be spared but those quite farther away would be considered when all other negotiations had been completed.

“There are certain things I cannot say or hear but I know this exercise will be given a human face,” she had assured the anxious residents.

The Immediate Past Assembly Member of the area and son of the late chief, Mr Daniel Sackey, described the demolition as a sign of disrespect and disregard for the chiefs and elders of Weija.

He said after agreeing to demolish only buildings that posed a threat to the dam, the demolition team went contrary to that.

Mr Sackey said the act was tantamount to undermining the peace and security that Weija had enjoyed, in the event throwing the town into confusion.