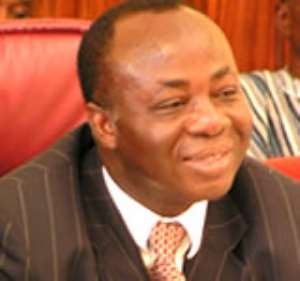 
Ms Vicky Bright, the President's nominee for the post of Minister of State at the Presidency on Thursday put up a repentant performance at the resumed sitting of the Parliamentary Vetting Committee in Accra, sending signals that she could be considered for the position, which eluded her during the main sitting of the Committee in the last session.

She took the opportunity to apologise for her rude behaviour when she first appeared before the Committee, adding that, it was not meant to be so. The Committee withheld its decision on her approval or otherwise since it was found, among other things, that she was holding a British citizenship.

"What I said earlier when I met the Committee was wrong in reference to, if my nationality was relevant to the discussion. I apologise for it."

The Committee is chaired by Mr Freddie Blay, First Deputy Speaker of Parliament.

Ms. Bright, who is appearing before the Committee for the second time following the refusal of the Committee to approve her nomination, said she was married but has the permission of her husband, a Mr. Emewura, a Nigerian, to use her maiden name.

Ms. Bright said she had notified the British Home Office of her decision to denounce her UK citizenship and received receipt of payments required to initiate the procedure.

It was however, clear that even though she holds a Ghanaian passport, she has not gone through the effective legal procedures that would make her a full-blooded Ghanaian citizen.

This came to light when Mr Alban Bagbin, Minority Leader sought to establish whether she had submitted herself to the full rigours of the laws and constitutional provisions that qualified her as a Ghanaian citizen following her denunciation of British citizenship.

Ms Bright declined to state how much she was earning as a Senior Partner with a law firm in London; and stated that she had a fair idea of what she was going to earn as a Minister of State, though she knew that the amount that goes with the position could be less.

"My heart has always been with Ghana. It is not actually about the money. I returned to Ghana after realising from several negotiating missions across Africa that the various countries lacked the capacity to negotiate fairly with foreign partners.

"I then concluded that I was on the wrong side of the table and thus decided to come home to help reverse the trend," she said.

Earlier, she explained that she would not go back for her UK citizenship.

She said she would be honoured to serve the nation in the position she has been nominated for, stressing that, "I would help in various jobs and innovations in the area of telecommunications and negotiations as well as collaborate with my Minister."

Mr Osei Kyei-Mensah-Bonsu, Deputy Majority Leader, who has been nominated for the post of a Minister of State, was the first to appear before the Committee. Questions posed to him were mainly on the merits and demerits of Ghana Parliamentary system.

He argued that the mixture of the governance system which requires the President to choose majority of his Ministers from parliament does not necessarily weaken the law making body.

"Rather, I believe that it strengthens it, energising Parliaments' arm to undertake its duty."

He also advocated for a review of Parliament's standing order in reference to the structure of the leadership of the House.

The Committee, which later sat in camera is expected to come out with its decision by the close of the week.