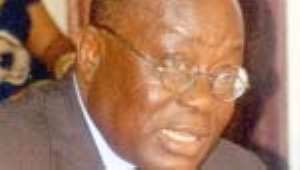 Former Minister of Foreign Affairs and aspiring New Patriotic Party (NPP) presidential candidate, Nana Addo Dankwa Akufo-Addo was the toast of delegates at last Saturday's NPP-USA congress in Dallas, Texas, in the United States of America, where he made his sixth successive attendance.

Delegates were falling over each other to take memorable photographs with him, implying that this may be their last chance to take shots with him before he becomes president.

He was the only aspirant apart from Felix Owusu-Adjapong, former Majority Leader and Minister of Parliamentary Affairs, who later joined party representatives to attend the Dallas congress after initial hiccups at the airport.

The issue of ROPAA came up strongly, with delegates from NPP branches in 20 States of the US and representatives from the United Kingdom, Ireland and Canada branches calling for their participation in future elections.

The congress was climaxed with a dinner dance.
The other 17 presidential aspirants were no where to be found, perhaps taking into consideration the fact that the single vote each from the NPP overseas branches may not make much difference at the December 22 congress at the University of Ghana, Legon.

According to the organizers, some of the aspirants called at the eleventh hour to cancel their participation, citing the selection of delegates back home.

In the case of Vice President Aliu Mahama, he sent them a letter expressing deep regret about his inability to participate because of official assignments, while Dan Botwe, former General Secretary sent the congress a solidarity message.

Nana Akufo-Addo, accompanied by his campaign managers, held the delegates spellbound with his delivery on why he wanted to succeed President John Agyekum Kufuor, assuring Ghanaians abroad of a big role in the development process of the country.

The Abuakwa South MP, who had another political engagement in Atlanta, Georgia, noted that Ghanaians abroad were partners in the development agenda of the country, stressing that recognition would be given them.

He maintained that other countries had successfully integrated the expertise of their nationals abroad into their development needs, pointing out that he would study various models for adoption.

Nana Akufo-Addo cited the role of overseas-based Chinese in shaping the economy of their country, saying Ghanaians in the Diaspora could do same.

The former Foreign Affairs Minister, who used a considerable part of his speech to eulogise the NPP administration, described the upcoming congress as challenging, especially since it was the first time the party would be electing a presidential candidate in office after the 2000 electoral victory that ushered in the Kufuor administration.

Nana Akufo-Addo told the delegates it was critical for the NPP to elect a candidate who would retain power for the party.

Looking at the credentials of previous candidates, he said, he had the pedigree to propel the party to victory, stressing that his marketability was not in doubt.

“Adu Boahen's choice in 1992 was a good decision. Kufuor's selection in 1998 has been vindicated by history. Akufo-Addo's choice on December 22 would not be a regrettable decision,” he stated amidst a wild applause.

He kicked against any attempt to make the party an appendage of the executive. “We need to protect the independence of the party as a sovereign unit and ensure that it does not become an appendage of government. If anything at all, it should be the other way round.”

Warning against the re-enactment of the Swedru Declaration which sent the NDC onto its knees, the presidential hopeful stressed the need to preserve the ethos and values of the NPP.

“I have confidence that the party would emerge stronger after the congress.”

Answering questions from delegates, Nana Akufo-Addo debunked the perception that he was arrogant, describing it as the work of political opponents.

“Maybe my political opponents have resigned themselves to Akufo-Addo's candidature and therefore would do everything to throw mud at him in order to stick.”

He said he was a simple person with a strong feeling against injustice, and expressed delight about the growth of the party in the United States, with more people signing up for its membership.

Former Majority Leader and MP for Akyem Swedru commended the US branch for their commitment to the party, adding that the NPP could not go to the polls on the strength of its achievements in power alone but that the party needed somebody like him to win the next year's elections.

Nana Obiri Boahen, Minister of State for the Interior, who acted as lawyer for the Diasporans, appealed to Ghanaians abroad to support the recent flood victims, and acknowledged the NPP-USA's donation of $5,000 to support the victims.

The Minister, also the Co-ordinator of Inter-Ministerial Committee, observed that government alone could not meet the cost of the disaster that had rendered 400,000 people homeless.

“As the national coordinator, I'm appealing to you to support them.”

Sensitize School Children On Wearing Face Masks Before And A...
46 minutes ago