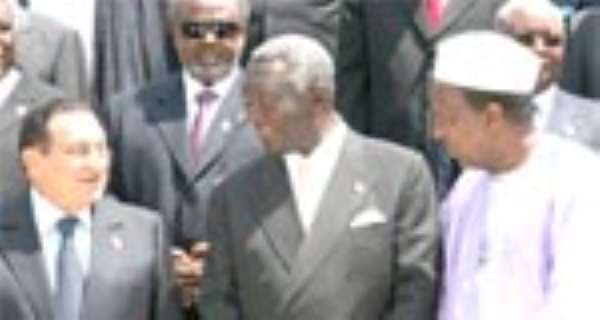 PRESIDENT JOHN Agyekum Kufuor has asked the presidential aspirants of the New Patriotic Party (NPP) to work hard to be elected to lead the party in the 2008 general elections.

He told the aspirants that he worked hard before eventually winning the flagbearership of the party to lead it in the 1996, 2000 and 2004 general elections.

The President as well warned them not to use his office to interfere in the organization of the impending national delegates' congress.

Mr. Kwabena Agyei Agyepong, one of the aspirants, revealed this on Nkosuo radio in Kumasi during its morning show programme on Wednesday.

On the issue of a successor to the President, Mr. Agyepong advocated the election of a young person imbued with inner tenacity and oomph as the party's presidential candidate to revitalize the operations of the party and make it vibrant.

He said past leaders of the party such as Dr. Kofi Abrefa Busia, who saw the need to place young members of the party at sensitive positions in government, gave ministerial appointments to Dr. Safo Adu, Messrs Jones Ofori Atta, K.G Osei Bonsu and J.A Kufuor, who were then aged 36, 35, 34 and 33 respectively, to contribute to national development.

"Dr. Busia is dead and gone but 40 years down the line, one of the young men he worked with is now president," he stated.

Mr. Agyepong appealed to executives of the party who would form the Electoral College to consider electing a young energetic person to lead the party after the exit of President Kufuor.

Mr. Agyepong, former presidential spokesperson, who was the fourth to submit his nomination forms with the ¢250 million filing fee, expressed optimism that he would be elected flagbearer of the party in view of his sacrifices for the development of the party.

Recounting the political history of the country, the former presidential spokesperson said young men had made a lot of contributions to the country since the attainment of independence in 1957.

According to him, at the time of independence, the first president, Dr. Kwame Nkrumah was 47 while the then opposition leader, Dr. Busia was 43.

He stated further that Dr. Hilla Limann was elected president of the country at the age of 46, whereas Kutu Acheampong, A.A Afrifa and former president Rawlings became heads of state at the ages of 38, 34 and 33, respectively.
“I am 45 years old, and if the delegates endorse me as their flagbearer and eventually president of the country, I would be 47 years old just as Nkrumah was 47 when he became president,” he indicated.

He told potential delegates of the party that the world had changed, so it was time young people in the party were given the chance to run the affairs of the country.

He said with 70 percent of the electorate aged between 18 and 39, the only major challenge for him now was to convince them about his plans for the development of the nation.

“My vision is to develop Ghana and I will do that by restoring the culture of hardwork. Agriculture will be the backbone of the economy,” he stressed.

Mr. Agyepong as well pledged to draw up strategies and frequently meet with business people in the country to assist them with the requisite infrastructure to set up factories so as to manufacture a variety of products locally.

This, he said, could help reduce the importation of goods into the country, which he said had virtually killed the local market.

The importation of over $300 million worth of sugar into the country, he said, could stop if sugarcane cultivation was encouraged and supported in the country.

Mr. Agyepong indicated that industrialization was the best avenue through which jobs could be created for the unemployed youth of the country, so more factories needed to be set up to provide employment for the people.

He argued that frequent travelling by the youth in search of greener pastures would cease if factories are established in the country; “At least, we should have 20 cocoa processing factories in the country to provide employment for the youth.”

Touching on the marathon meeting between the party's presidential aspirants and President Kufuor at the Castle recently, the former presidential spokesperson said speculation that some of the aspirants did not utter a word at the meeting could not be true because it was held in-camera.

He said he spoke at the gathering but was not worried about rumours that the President was supporting one of the aspirants because the President is a human being like any other person.

According to him, his only problem was for the party to put into operation effective mechanisms to ensure free and fair election at the delegates' congress.

The NPP presidential aspirant expressed concern that with barely two months to the congress, the aspirants were still ignorant about the delegates who would vote at the much touted congress.