Fathia to be buried in Accra next Tuesday 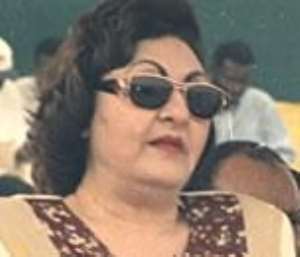 Fathia Nkrumah, wife of Ghana's first President, will be buried in Accra, next Tuesday, June 12, at the Kwame Nkrumah Mausoleum, beside her husband.

Sekou Nkrumah, one of her sons, yesterday confirmed this to the Times and added that the body will be brought to Accra on Saturday aboard an Egypt Air flight.

He said the burial date was settled on following an agreement between the family and the government.

Sekou said the remains will be accompanied by his uncle Fekry Halim Ritsk, 80, and his other siblings, Gamel and Sania Nkrumah as was reported in the Times yesterday.

Madam Fathia, who died last Tuesday in a Cairo hospital after a protracted illness, was said to have expressed the wish to be buried beside her husband, to serve as a symbol of unifying the nation.

Earlier a consecration ceremony was held last Friday at the Coptic Orthodox Church in Cairo, which was attended by a large gathering that included officials from the Ghana Embassy in Cairo and Sedig Mahdi, a former Prime Minister of Sudan.