I Didn’t Receive Money From Anyone - Nyarko 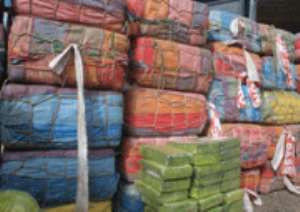 One of the three policemen being tried for allegedly aiding the fugitive Sheriff Asem Dakeh to abscond with 2,280 kilogrammes of cocaine yesterday denied the offence and told the Accra Fast Track High Court that he never received any money from Sergeant Samuel Yaw Amoah or anybody in connection with the case.

Opening his defence, General Sergeant David Nyarko said he did not know Sheriff and had never visited him before in his house.

According to him, the money he used to purchase an Opel Astra car, with registration number GT 1640 X, was not from the alleged cocaine business but rather it was from his late father's pension benefits, which he, together with his siblings, used to purchase the car.

A fourth accomplice, Detective Sergeant Samuel Yaw Amoah, is on the run.

The accused persons are alleged to have received an unspecified amount in dollars from the fugitive cocaine owner and allowed him to flee.

They have been charged with two counts of engaging in prohibited business relating to narcotic drugs and corruption by a public officer and have pleaded not guilty to both counts.

Led in evidence by Mr Musah Ahmed, the accused person, who spoke Twi which was translated by an interpreter, narrated how he became associated with the case and said that he and Sgt Amoah were both stationed at the Tema New Town Police Station.

He said on April 26, 2006, he closed from duty at the Dangme Rural Bank at Tema New Town at about 5.45 a.m. and submitted his weapon and ammunition but not quite long after, Sgt Amoah came to solicit his assistance to effect the arrest of some suspects.

Following that, Sgt Nyarko said, he took an AK 47 assault riffle and 20 rounds of ammunition from the counter NCO, Sgt Ofosu, and, together with Sgt Amoah, took a taxi to the Paradise Beach where they met a fisherman and one other person he did not know.

He said at the beach, Sgt Amoah introduced him to the two persons who said they were going to show the policemen the suspects.

The accused person said on the way to the beach, the others started jogging but he could not join them and as a result he lost track of them and did not see Sgt Amoah again until later when he met Lance Cpl Bondorin and Sgt Isaac Asante who informed him that they were also at the place on a similar mission to arrest some suspects.

He said the two policemen told him that the other policemen had gone towards the beach but from where they stood there was no likelihood that anybody would come from the direction of the beach.

Sgt Nyarko said when they decided to return to the Kpone Police Station, he saw a green Toyota Land Cruiser, with registration number GT 21 W, coming from the direction of the town and after passing by them for about 70 metres, the car pulled up and Sgt Amoah alighted and ran towards him.

He said Sgt Amoah then told him that they did not see anything at the beach but when he asked about the whereabouts of the fisherman with whom they went to the place, he was told that he was in the car.

“When I asked Sgt Amoah about the car, he said it was for his friend whom he met at the beach and decided to give him a lift to Tema,” he said.

According to him, he told Sgt Amoah that Lance Cpl Bondorin was around and discussing something with a friend. In order not to waste Lance Cpl Bondorin's time he (Nyarko) went to tell him about what had happened.

Asked by counsel whether he saw the driver of the Toyota Land Cruiser, as well as its occupants, the accused person replied in the negative and stated that he went to Tema Community One and called Sgt Amoah with whom he later went to the Tema New Town Police Station.

At the police station, he said he submitted his weapon, together with the ammunition, but he did not record that he was back from the operation, since that was to be done by Sgt Amoah.

Reopening Of Schools: Not Testing Students, Staff Dangerous,...
27 minutes ago