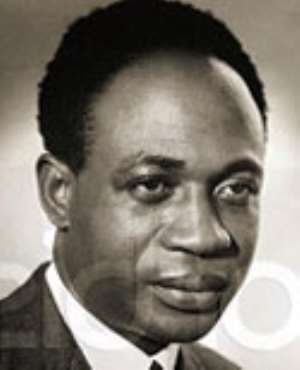 A SENIOR citizen of the land, Opanin Kwame Afreh, has once again appealed to President John Agyekum Kufuor and his government to incorporate into the celebration of the nation's 50th anniversary the final funeral rite of Ghana's first President, Osagyefo Dr. Kwame Nkrumah.

This, the 68-year old man believes, will position Ghana to receive her blessings and prosperity from the Almighty God in the face of the Golden Jubilee celebration starting off from March 6 this year.

According to him, anything short of this will hinder the progress and the forward match of the country's development as planned to attain the middle-income status by 2015.

Speaking in an interaction with The Chronicle in Kumasi, the firebrand politician commended the New Patriotic Party (NPP) government for the planned celebration, indicating that the celebration stands not to be completed and dignified if the man who fought for the independence is not honoured.

Making analogy with tradition settings and some custom practices of this country, Opanin Afreh, who is the interim Ashanti Regional Organizer for the Democratic Freedom Party (DFP) argued that it only serves right customarily to celebrate the late President's final funeral rite alongside with the 50 years anniversary.

“Is it that ironic that people from the Danquah/Busia tradition who were skeptical for early independence of this country are now leading the golden jubilee celebration?”, he asked rhetorically and added that it was simply God's plan and arrangement.

According to him, a particular government had the opportunity to perform the final funeral rite of the late Osagyefo when the country attained her silver jubilee, but did not, because that government was not meant for it, hence, went unnoticeable.

He firmly believed that God is behind this celebration and for that matter everything possible must be done to get the total blessings that accompany it.

He therefore, appealed to the present government not to hesitate, but go all out to perform Dr. Nkrumah's funeral no matter what it takes to bring honour and dignity not only to the family of the late Ghana's first President, but also to the NPP and the country as a whole.

He also congratulated President Kufuor for his calmness and tolerance to provocative and insulting languages of the NDC and its godfather for the past six years of assuming the mantle of leadership of this country while indicating his support for peace building, consolidating democracy and the gains so far chalked as a nation.