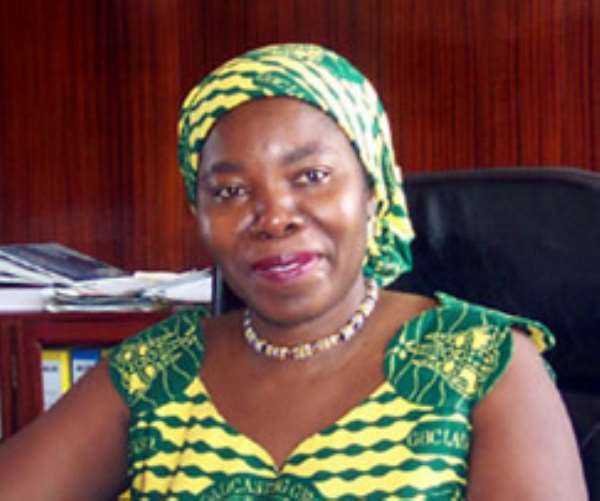 The Attorney-General's Department has cleared Ms Eva Lokko, the Director-General of the Ghana Broadcasting Corporation (GBC), of any involvement in the forgery of cheques at GBC.

A copy of the letter clearing her, dated November 30, 2006 and signed by the acting Director of Public Prosecutions, Gertrude Aikins, noted that police “forensic examination has revealed that the signatures on the forged cheques are not and cannot be yours, please”.

The letter, a copy of which is available to the Daily Graphic, said Ms Lokko was the complainant in the case involving Bismarck George Kuleape and six others.

It said Ms Lokko was not one of the suspects, neither was she under investigation, stressing that the police stated that “you have never been arrested in relation to the case”.
It said the police, therefore, “gives you a clean bill of health”.

Sources close to the National Media Commission (NMC), however, said since the tenure of Ms Lokko had expired, for which reason the position had been advertised, it was unlikely that her appointment would be renewed.

Some time in January and September 2005, the Bank of Ghana and the Prudential Bank informed the management of GBC of incidents of cheque fraud.

Ms Lokko, accordingly, invited the Criminal Investigations Department (CID) to investigate the cases of alleged cheque fraud on the same days that the banks informed her about them.

However, as a result of worker agitation and her purported involvement in the fraud case, the board chairman of GBC, in a letter dated October 28, 2005, directed Ms Lokko to proceed on leave with effect from November 2, 2005, hand over her responsibilities to the chairman and assist with investigations while on leave.

Ms Lokko went to court to seek a declaration of the court that the action of the chairman of the board was illegal, void and of no effect “because there was no meeting of the board out of which the decision was purportedly made to give the said instructions to the plaintiff and that even if a purported meeting was held, there was no quorum”.

It was also the contention of Ms Lokko that she was not under investigation, she had not been charged with any offence, had not received any query from the disciplinary authority under the manual, had not been suspended nor interdicted and had not been given the opportunity to be heard in that regard.

Since the directive of the board chairman, the doors to and windows of Ms Lokko's office were shut and/or barricaded with plywood, thereby preventing her from having access to the office.

On several occasions when she wanted to go to her office, some of the workers rose up in arms against her, threatening to deal with her. Ms Lokko was appointed Director-General of GBC on September 2, 2002.

On assumption of office, she formulated policies to review and amend existing rules and procedures and raise the image of GBC, as well as improve transparency and accountability in the affairs of the country's only state broadcaster.