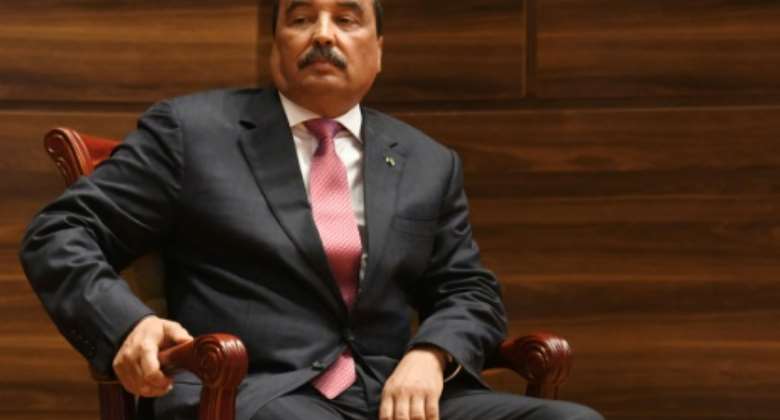 Former president Mohamed Ould Abdel Aziz, pictured in 2019 at the handover of power to his then right-hand man, Mohamed Ould Ghazouani. By Seyllou (afp/AFP/File)

Aziz, a 66-year-old former general, appeared in a court in Nouakchott among 10 defendants, including former prime ministers, ministers and businessmen, an AFP reporter saw.

They face charges that include abuse of office, influence peddling, money laundering and illicit enrichment.

Proceedings began with a rollcall of the defendants to which Aziz, dressed in a blue grown, rose and raised his hand.

The defendants were placed in a metallic cage-like stand in the courtroom as hundreds of police stood guard outside.

Aziz, a trader's son who came to power in a coup, stepped down in 2019 after two presidential terms in which he defused a jihadist insurgency threatening the conservative West African state.

He was succeeded by his former right-hand man, Mohamed Ould Ghazouani, in the first transfer of power between elected leaders in the history of a country marked by military coups and upheaval.

But within month of the handover, allegations emerged of financial misdealings.

Aziz is suspected of siphoning money from state contracts or the sale of real estate, amassing a fortune equivalent to more than $72 million.

He denies the allegations against him and says he is the victim of a settling of scores.

Mauritanians interviewed by AFP hope the trial will set a new benchmark in the fight against graft in their country.

Mauritania is ranked a lowly 140th out of 180 in the 2021 Corruption Perceptions Index by the organisation Transparency International.