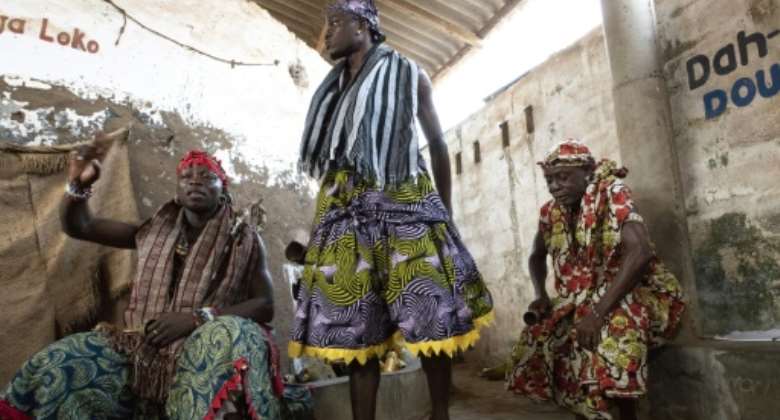 Some of the rituals of Benin's Voodoo followers took place at the Dah-Gbo Zonon convent in Ouidah. By Yanick Folly (AFP)

Every year in Benin, locals celebrate a festival in tribute to the deities of Voodoo, the indigenous religion worshipping natural spirits and revering their ancestors.

Increasingly, the festival is drawing people of African descent from America, Brazil and the Caribbean seeking to discover the religion and land of their ancestors enslaved and shipped away from the beaches of west Africa.

Voodoo, known locally as Vodoun, originated in the Dahomey kingdom -- present-day Benin and Togo -- and is still widely practised sometimes alongside Christianity in coastal towns like Ouidah, once a trading hub where memorials to the slave trade are dotted around the small beach settlement.

"We come here first to search for our origins and reconnect with Mother Earth," said Louis Pierre Ramassamy, 45, from Guadaloupe who was in Benin for the first time and visiting Ouidah.

He came to discover the Vodoun festival, but his stay goes beyond that.

He said he wants to follow the footsteps of his ancestors, who were taken from Ouidah centuries ago and to rediscover the divinity practised by his maternal grandmother.

Consultations and sacrifices were made for him in a Vodoun convent in Ouidah to help him reconnect, he said.

"If luck does not smile on me this time, I will come back another time. I need this reconnection for my personal development," the tourist told AFP, his camera focused on the movement of voodoo practitioners on Ouidah's imposing Atlantic Ocean beach.

Dozens of followers dressed in white cloth face the ocean each festival to pay hommage in Ouidah to Mami Wata, a goddess of the sea.

Nearby is an arch, the "Door of No Return", in memory of those jammed onto slave ships from Ouidah's beach bound for the New World.

"Our ancestors foresaw this return of Afro-descendants. They are eagerly awaited by the ghosts of our ancestors," said Hounnongan Viyeye Noumaze Gbetoton, one of the Vodoun dignitaries in Ouidah.

"When they return, it is to take blessings and recharge their batteries to move forward."

Brazilian Anaica Durand said she had passed this stage.

She managed to reconnect with her family of origin, the family of Almeida from Benin and is delighted with it.

January 10 has now become a moment of great festivity for her to revel in the songs, dances and celebrations around Vodoun.

Like her, Alexandra Bajeux is on her second stay in Ouidah. This year, she came to pay hommage to the Snake deity Dan.

Ouidah was once a slave trading hub and now a centre for the Voudon religion. By Yanick Folly (AFP)

"All the consultations revealed that it was the cult of my ancestors," she smiles, white loincloth tied at the waist.

The 29-year-old Haitian plans to settle in Ouidah to devote herself full-time to this religion.

"Dan is happiness and he is a source of wealth," said the young woman who swears "to have finally found the happiness that she lacked".

"Our major objective is that the indigenous culture never fades away... Sooner or later, all Afro-descendants will return to the fold. This is what our ancestors say," said Hounnongan Viyeye Noumaze Gbetoton.

Francis Ahouissoussi, a Benin sociologist specialising in religious issues, explains this attachment of descendants of African slaves as "a natural need that they must fill".

According to him, many Afro-descendants feel they "are in a permanent quest for their true identity", part of which is addressed for some by the role of Vodoun.

For Brazilian Ana Beatriz Akpedje Almeida it felt like she was connecting the deities she knew from Brazil and others and to her ancestors.

"I think most people from the diaspora can connect with this kind of knowledge," she said. "Voodoo is a perspective about humanity."

US visitor Chastyl told AFP it was also her first time in Benin.

"I have seen so many divinities and a lot of dancing," she said. "I don't have any family here, they are all in the United States, but obviously somewhere, we are from here."