Ouattara hopes for normal relations with Mali after release of 'mercenaries' 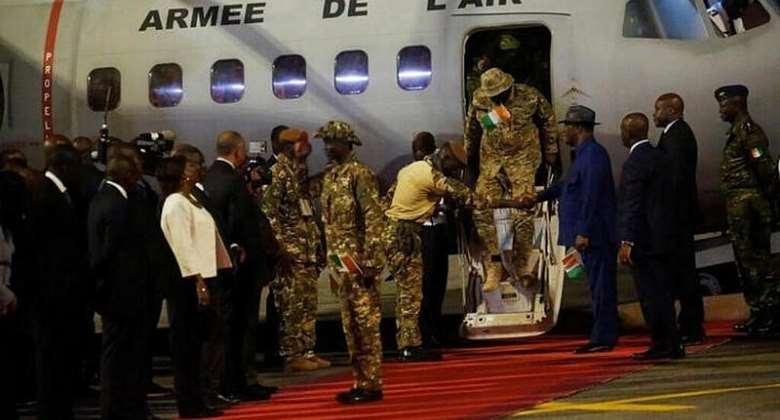 Ivorian President Alassane Ouattara has said he hopes Côte d'Ivoire and Mali can move on from the diplomatic crisis sparked by the arrest last year in Bamako of a contingent of Ivorian soldiers, accused by Mali of being mercenaries.

Forty-six Ivorian soldiers arrived in Abidjan last weekend, having been pardoned by the neighbouring country's junta.

The troops, whose detention triggered a bitter diplomatic row between the countries, were arrested on 10 July 2022, on arrival in the Malian capital Bamako.

Mali accused them of being mercenaries, while the authorities in Côte d'Ivoire and the United Nations insist they were flown in to provide backup security for the German contingent of the UN peacekeeping mission.

On 30 December, a Bamako court sentenced the soldiers to 20 years in prison, while three women among the original 49 arrested received death sentences in absentia.

The military personnel were convicted of an "attack and conspiracy against the government" and of seeking to undermine state security.

They were also found guilty of “possessing, carrying and transporting weapons and munitions of war […] with the aim of disturbing public order by intimidation or terror”.

Relations between Mali and its West African neighbours were strained before the arrests, since elected president Ibrahim Boubacar Keita was toppled in August 2020 by officers angered at failures to end a jihadist insurgency.

After the troops were detained, the UN acknowledged some procedural "dysfunctions" admitting that certain formalities had not been followed.

The row escalated in September, with Mali calling on Côte d'Ivoire to acknowledge its responsibility and express regret for deploying the soldiers.

The Ivorian government rejected both demands .
"This hostage-taking will not be without consequences," Ouattara warned at the time.

The tensions led Mali's interim prime minister, Abdoulaye Maiga, to denounce a "synchronisation of actions" against Mali at the UN General Assembly in September.

He attacked UN Secretary-General Antonio Guterres for having declared that the Ivorian soldiers were not mercenaries.

He also criticised ECOWAS chief Umaro Sissoco Embalo, as well as the heads of state of Côte d'Ivoire and Niger.