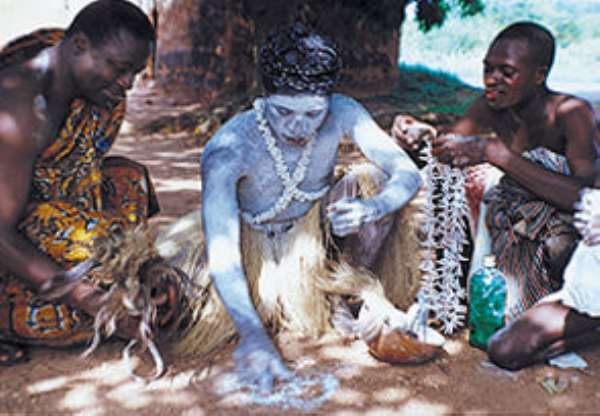 Mensakrom, C/R, Dec. 10, GNA - Yaw Agbenu, a fetish priest at Mensakrom on Friday led heavily armed police personnel from the Agona Swedru Divisional Police Command to exhume the body of his former wife he murdered and secretly buried and allegedly told the police that this was the eighth person he had murdered since the beginning of this year. He had led the police and relatives of his late wife, Madam Afisah Salami whom he allegedly murdered on December 2, this year, when the woman came to collect money for the payment of their son's medical bill.

The Swedru Divisional Crime Officer, Deputy Superintendent of Police (DSP) Osei Akoto, who led the team told the Ghana News Agency that the people the fetish priest allegedly murdered were not from the area since no one had reported missing relatives to the police. He said the fetish priest told the police that most of the people he killed were used for rituals.

DSP Osei Akoto said Agbenu was not able to make more revelations because of the mounting tension in the town over the murder of the woman.

According DSP Osei Akoto the police discovered a number of bones behind his house and in a nearby bush.

Meanwhile, the body of Madam Afisah Salami has since been buried at Akim Akroso, while police investigation continues.
Duakwa Chief reacts to gruesome murder cases in the Area
Agona Duakwa, C/R, Dec 10, GNA- Nana Kojo Amoakwa V, Chief of Duakwa has expressed grave concern over the recent increase in murder cases in the area and warned that anybody caught would be handed over to the police.

According to him, within one month there had been two murder cases reported at Duakwa and Mensakrom, a situation that has created panic and fear in the area.

Nana Amoakwa was reacting to reports of the murders during a press conference attended his elders on Sunday.

He said some time last month, a 32-year-old farmer Fofo Tretu Dotse went missing at a village near Agona Duakwa and after some time his bones were found scattered at a spot in the bush.

Nana Amoakwa said his suspected assailant, whose name was being with held for security reasons had refused to respond to the chief's call to meet the chiefs and his elders of the area. Nana Amoakwa, who is also the Krontihene of Agona Nyakrom Traditional Area said the murder of a woman by her former husband who is also a fetish priest at Mensakrom on December 2, has worsened the situation.

He said this has prompted him to meet the Chief of Mensakrom Nana Appiah Kubi V, fetish priests and settler farmers in the area to see how best they could bring the situation under control. Nana Amoakwa said that much as the people in the area would continue to live with any settlers from any part of the country and outside, they would not sit down unconcerned for such people to engage in any dubious activities, which is against the laws of the land. He urged the people of the area, who had become angry over the situation and have decided to attack suspected settler farmers and fetish priests to exercise restraint and allow the police the handle the matter.