Yet Another NPP Major Weighs in 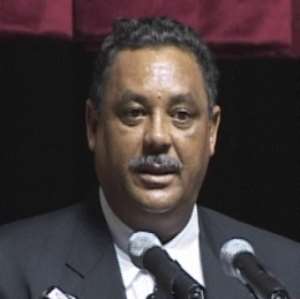 The Chronicle can report that that the Minister of Tourism and two times National Campaign Manager of the New Patriotic Party (NPP), Mr. Jake Otanka Obetsebi-Lamptey, is unfurling his gloves to enter the ring which is already creaking at the seams with a large number of contenders for the highest and most coveted crown in the land- the Presidency of Ghana.

Campaign handlers and strategists of Jake who have spoken to this reporter asserted over the weekend that Mr. Obetsebi Lamptey whose father is an illustrious son of Ghana - is singularly motivated by appeals from some parliamentarians and foot soldiers of the party who have additionally pledged their support for him. They curiously refused to be identified by name in this report.

Additionally, Jake who was routed politically for the ears of President Kufuor by another Castle hand who is running for the high office( Mr. Kwabena Adjepong) believes that he was the most qualified and competent person to lead the party in line with the findings of a pre-2008 election survey, conducted by NPP stalwart Mr. Appiah Menka, which indicated that for the NPP to win the 2008 elections it would require a Presidential Candidate who would naturally inspire and stimulate the rank and file of the party to sacrifice and work hard to keep the NPP in power.

Jake, has however, refused to speak to the press on his ambitions. When The Chronicle contacted him on his phone he said, "No Comment."

Independently Chronicle gathered that the strategists preparing the grounds for him include, the former Deputy Chief of Staff, Mr. Moctar Bamba, the Member of Parliament for Ablekuma Central, Mr. Okuley Nortey and a former Organizer of Okaikoi North, Mr. Emannuel Kwashie, a.k.a Charles Taylor This paper was told that the delay in making his intentions public is 'because of the Minister's commitment to adhere to the rules and regulations of the party, which frown on the declaration of presidential ambitions by serving Ministers'.

The paper was informed that Jake is waiting patiently for the party to formally open the contest before he formally declared his interest Sources close to the Minister told the paper that his presidential aspiration began when almost all the aspirants sent emissaries to see him personally for his support to enable them win the party primaries, in exchange for the offer of the position of Vice President.

These approaches coupled with the notion that that NPP would have to nominate a non-Ashanti or an Akan as its presidential candidate to deal with the public perception that NPP was an Akanistic party are said to have given the minister the desire and conviction that he himself can battle to win the presidential ticket of the party.

However The Chronicle can confirm a downside to his ambitious endeavours, - his wife's contention for Assemblywoman for Lakko Electoral Area which was part of Jake's strategy to determine his natural popularity among the Gas went bad as she lost even if it was by a narrow margin, according Jake's men. But this has not deterred Jake but he believes Jake will still gain acceptance of his people.

Mr. Obetsebi Lamptey is also said to be getting ready at taking some lessons in proficiency in some local languages, to enable him wage an effective national campaign if given the nod to lead the NPP.

The Chronicle gathered that Jake is presently not bothered about the question of certificates, a subject he choked on during his vetting by Parliament, since as far as he is concerned he has demonstrated sufficiently that he is an achiever.

The sources continued that the Minister's aim is to execute the "Joseph Project" which is expected to attract about one million tourists into Ghana and generate $1 billion dollars per year and present Ghana as "the Mecca of African - Americans" and the hub of African Emancipation.

The major challenge facing the Minister as far as his presidential ambition is concerned is said to be money. The Chronicle gathered that the campaign machine might be far from take-off point as he has a long way to go in mobilizing funds to oil his campaign train.

He is however, said to be strategizing with friends and supporters on how to raise the funds before officially translating his ambition into a concrete launch and take-off.

Credible information suggests that the campaign team of the Minister, run shot of money but members were still doing the underground campaign while Jake continues with his money searching expedition.

When The Chronicle contacted Mr. Abeiku Dickson, the Special Assistant of the Minister, he intimated that the best person to speak on the issue was his boss, who was out of town.

He continued that he was Jake's special assistant on issues about the Ministry of Tourism but not on politics.

"You see, I am the special assistant of Jake on the ministry but not on this issue so even if Jake has told me about his plans, I cannot comment on it so you have to speak to Jake himself," he concluded.

Jake was said to have traveled to Sokoto in Nigeria in pursuit of the Joseph project and his deputy was not available.

Honourable Joe Badu Ansah, member of the National Media Commission and Member of Parliament for Effiakwesimintsim would be expected to step up to the position of full Minister of Tourism once Jake resigns as he ought to as required by convention.