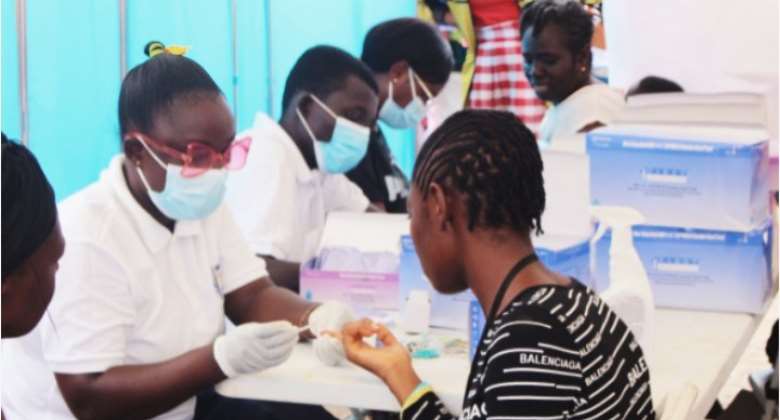 A call has been made for the people of Obuasi to stop all forms of discrimination and stigmatization against people living with HIV.

Henry Yeboah, the HIV Focal person at the Obuasi Municipal Assembly made this call when he interacted with the media at the sidelines of an event held in Obuasi to mark this year's world Aids day.

He said this year's national theme for the celebration " Equalised: Twenty years of multi-sectoral response to HIV and AIDS in Ghana: Accelerating progress to end AIDS” is a clarion call on Ghanaians to address the inequalities that continue to hold back the gains made in ending HIV/AIDS.

He said " discrimination and stigmatization continue to hamper the progress made in the fight against HIV. This creates barriers to HIV testing, prevention and access to HIV treatment in Ghana. There is the need for concerted efforts by all Ghanaians to nip such practises in the bud"

He appealed to residents of Obuasi to always avail themselves to be screened for HIV since early detection prevents the opportunity for one to seek for treatment if infected with the virus.

Isaac Nimako, a Nurse at the Obuasi Government Hospital bemoaned the nonchalant attitude of Ghanaians towards HIV. He said the disease keeps rising at an alarming rate especially among the youth in the country.

According to the World Health Organisation (WHO), about 38.4 million people were living with HIV in 2021, of this staggering figure, 36.7 million were adults and 1.7 million, children.

On efforts made by the Obuasi Health Directorate to fight the disease and keep the numbers down, Mr. Nimako said the Directorate will step up its sensitization drive by going to workplaces and market places to educate the people on the HIV preventive measures.

The celebration of world Aids day in Obuasi involved free screening of people on HIV and other diseases as well as free NHIS registration and renewal.

He said currently, the Obuasi office he achieved 84% of its 159,000 target and was optimistic that they will be able to achieve the target set for the year.

Founded in 1988, World AIDS Day was the first ever international day for global health. Every year, United Nations agencies, governments and civil society join together to campaign around specific themes related to HIV.