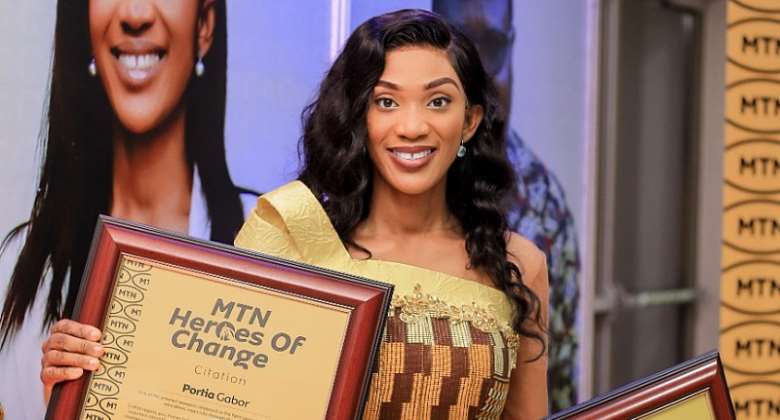 Media General’s multiple award-winning journalist, Portia Gabor Who was recently crowned GJA’s Journalist of the Year, has once again added to her awards list by winning the MTN Hero of change award.

She was among ten other persons awarded the MTN Hero of Change, 2022 on Thursday, November 24, 2022, The award comprised the citation, twenty thousand Ghana Cedis and the converted title, “Hero of Change”.

The award winning journalist's selection for the award was in recognition of her impactful reporting on COVID-19 at the time when the novel virus was at its peak and represented an existential threat all over the globe. The disease was then ravaging the world with several death casualties by the day but Portia placed her life on the line to interview a survivor to bring knowledge and hope about surviving the disease to Ghanaians.

Portia expressed surprise at the nomination and only found out on the day of the awards that one Yayra Ocloo had put her name out as someone who deserved to be recognised. She shared the experience of having to take extra care to avoid contraction of the virus while in the field and recognized the support of her husband and family who did not shun her even when she had been in the midst of COVID-19 patients but supported her to persevere.

Portia dedicates the award especially to Fredrick Drah, the very first COVID-19 patient and the first survivor in Ghana, held and treated at the Ga East municipal health center who overlooked the stigma suffered by COVID 19 patients at the time and gave her the chance to tell his story.

She also dedicates the award to the frontline health workers whom she says gave her access and much-needed information at a time when the whole world was still trying to understand the novel virus, when there was no standard medication and when the modes of transmission were still being debated.

Portia was full of praise for her crew and acknowledged the cameramen, Phillip Katsitiku and Prince Affum as well as the entire management and staff of Media General who supported her work during the period under review.

“I feel humbled by the female pacesetters in the industry, Gifty Afenyi Dadzie, Dr. Joyce Aryee…” who she says have personally congratulated her amid an outpour of cheers from the public.

The elated Portia Gabor has used this unexpected, but well-deserved honor to position herself as a mentor for up and coming youth who aspire to journalism. In her own words; “the result of hard work, is more work” in recognition of the journey ahead to make more impact in society.

Election violence in Nigeria's south east is threatening to ...
24 minutes ago