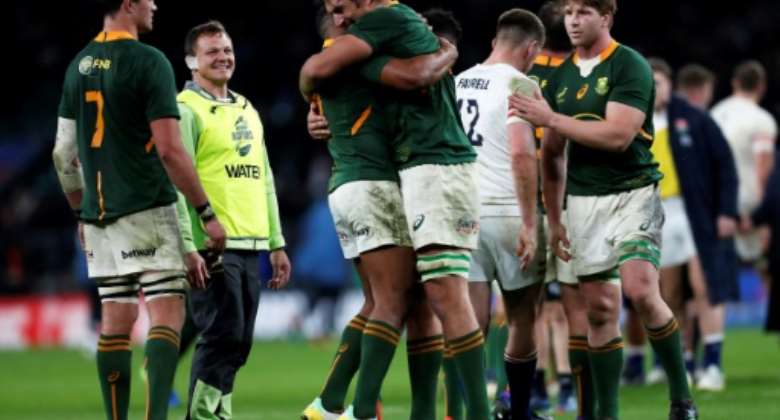 Joy of victory - South Africa player celebrate after a 27-13 win over England at Twickenham. By Ian Kington (AFP)

Tries from Kurt-Lee Arendse and Eben Etzebeth either side of half-time helped the Springboks to a first victory over England at Twickenham in eight years, with Damian Willemse landing two drop-goals and Faf de Klerk kicking 11 points.

South Africa were eager to finish the year on a high after narrow losses to France and Ireland in this month's Autumn Nations Series.

But this win meant they ended the calendar year with nine wins from 14 Tests ahead of their 2023 World Cup title defence in France.

And a dominant display at the set-piece, allied to a sharp cutting edge in the backs, was reminiscent of South Africa's crushing 32-12 win over England in the 2019 World Cup final in Japan.

"I told the guys we have to enjoy moments like this because we don't know if we're going to make it to the World Cup, it could have been some guys' last games but I thought it was special," Kolisi said.

South Africa were without several players for a match taking place outside World Rugby's official window, while they were also missing director of rugby Rassie Erasmus, who was completing a two-game ban following his outspoken social media criticism of referees following the France and Ireland defeats.

"It (Twickenham) is a tough place to get a result," said South Africa coach Jacques Nienaber. "It is Siya's first result here and obviously mine so it's very special."

The Springboks played the final quarter a man down after Thomas du Toit's red card for a dangerous tackle on Luke Cowan-Dickie.

But Henry Slade's late converted try was all the hosts could manage, with lightning failing to strike twice after England's stunning come from behind 25-25 draw with New Zealand last week.

"Everyone knew they had to work harder to make up for the extra man, and the way the forwards played was great," said flanker Kolisi.

'Good base' - England coach Eddie Jones was upbeat despite a defeat by South Africa. By Ian Kington (AFP)

Defeat meant England had lost six out of 12 Tests in the calendar year, their worst run since 2008.

Nevertheless, Jones insisted England could still have a "really good go" at next year's World Cup.

"We want to win," he said. "We don't want to get beat by a big score to South Africa and don't want to have the worst record since 2008 so it is a problem but I accept full responsibility for that."

"We weren't accurate enough in some bits and that was across the board," said Farrell.

"Obviously I played a role in that with the two missed easy kicks early on, so, yeah, we're hurting."

England, who will have to nurse this defeat until they begin their 2023 Six Nations at home to Scotland in February, saw Will Stuart (elbow), Marcus Smith (ankle) and Kyle Sinckler (hip) forced off in another bruising encounter with the Springboks.

"It was just one of those days where nothing seemed to go right," Jones said.