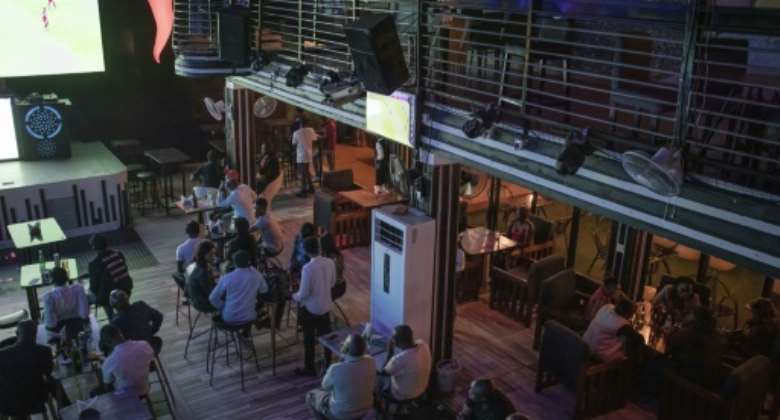 Over the weekend, football fans crowded the well-known Pili Pili bar to follow the World Cup opening match on the big screen. By Guerchom Ndebo (AFP)

Armed rebels have advanced to just a few dozen kilometres away, but in eastern DR Congo's main city of Goma, people are crowding bars and haggling in the market as usual.

In recent weeks, the M23 rebels have seized swathes of territory across North Kivu province, displacing tens of thousands of people and pushing closer to Goma, a commercial hub of more than a million people.

Despite the threat, many Goma residents are unfazed.

"The war is there of course, but that doesn't prevent you from having a beer in the evening," said Alain Zoeto, a 35-year-old hairdresser, attending a concert held at a bar in the city.

"The government has a duty to protect us and we have this freedom," he added, over the sound of Congolese rumba classics.

Machozi Binego, who was dancing at the same bar with a group of friends, was similarly cheerful.

"The people of Goma are still alive," he said.

Elsewhere in Goma, life has continued in relative normality. By Guerchom Ndebo (AFP)

The largely Congolese Tutsi M23 took up arms in late 2021 after years of dormancy, claiming the DRC had failed to honour a pledge to integrate its fighters into the army, among other grievances.

The fighting has sent relations between the DRC and Rwanda into a nosedive, with Kinshasa accusing its smaller neighbour of backing the M23 -- something UN experts and US officials have also said in recent months.

Goma lies on the border with Rwanda. But tensions haven't stopped revellers packing the bars at night, with motorbike-taxis shuttling them around.

"I keep working because I know the M23 won't come to Goma," said Dani, a motorbike driver, near a popular watering hole.

Over the weekend, football fans crowded the well-known Pili Pili bar to follow the World Cup opening match on the big screen.

"I'm not afraid, it's not the first time," said Amos, 19, referring to Goma's history of rebellions.

'Not think too much'

Over 120 armed groups are active across eastern Congo, many of which are a legacy of regional wars that flared at the turn of the century.

Joseph Katwaza, a 60-year-old exercising at a roundabout at the heart of Goma, said people 'want to continue with life'. By Guerchom Ndebo (AFP)

Goma was at the centre of those wars, and has been subject to several rebel uprisings too.

The M23 captured Goma in 2012 before being driven out and going to ground.

The forces of nature mean that the city's people are no strangers to fear and hardship.

The city has seen two eruptions from Mount Nyiragongo, one of the world's most notorious volcanoes -- one in 2002 and another just last year.

Joseph Katwaza, a 60-year-old exercising at a roundabout at the heart of Goma, said people "want to continue with life", rebels or not.

"Sport also helps me not think too much about the security situation," he added.

Chantal Manyure, a 20-year-old who was also exercising in the spot popular with runners and rollerbladers, said "sport helps us to prepare ourselves psychologically".

Machozi Binego, who was dancing at the same bar with a group of friends, was similarly cheerful. By Guerchom Ndebo (AFP)

But she was also stoic about the prospect of a rebel attack on the city. "It's not the first time," she said.

Elsewhere in Goma, life has continued in relative normality.

Markets continue to do business, although consumers complain that prices are rising due to rebel-caused supply problems.

Many nonetheless have an eye out for trouble. Rumours of a rebel push sent people in a displaced persons' camp fleeing last week, for example.

And residents are alert to loud bangs in the night -- worrying they might be the opening salvo of an attack.

Being an MP is serious business; the responsibility of a Min...
51 minutes ago