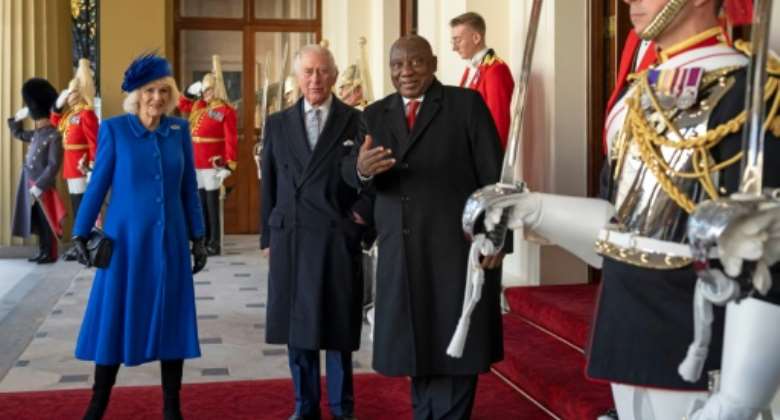 Gun salutes were fired across London as Charles and Queen Consort Camilla were joined by heir to the throne Prince William and his wife Catherine to greet Ramaphosa for a ceremonial welcome at Horse Guards Parade.

The monarch and Ramaphosa, both dressed in dark overcoats against the November chill, inspected the guard of honour together.

The parties then travelled to Buckingham Palace in a carriage procession escorted by mounted soldiers from the Household Cavalry.

The route along The Mall was decorated with the British and South African flags with the band of the Scots Guards playing the national anthems of both countries as the king and his guest arrived at the palace.

The two-day visit sees Charles finally presiding over proceedings after decades playing a supporting role to his mother Queen Elizabeth II, who died in September.

For Ramaphosa, a protege of anti-apartheid icon Nelson Mandela, however, it comes amid political difficulties and a threat of impeachment at home.

Ramaphosa inspected a guard of honour at Horseguards Parade in central London. By Kirsty Wigglesworth (POOL/AFP)

Charles and the South African leader were taken by carriage to Buckingham Palace. By PETER NICHOLLS (POOL/AFP)