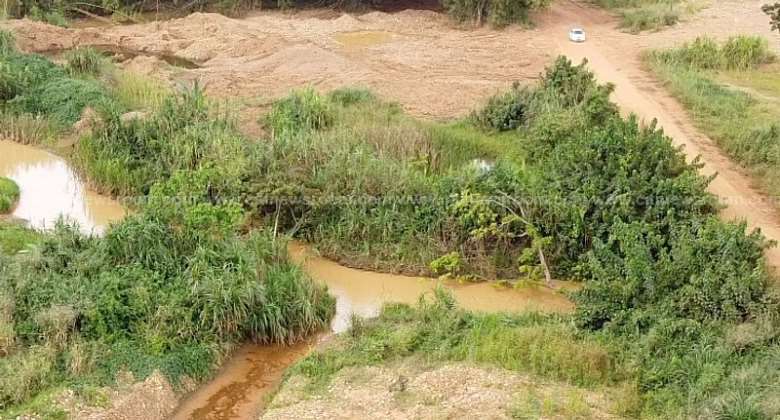 Galamsey is a local Ghanaian term which means illegal small-scale gold mining in Ghana, West Africa. Even though galamsey has been there for a very long time, it has become prevalent in recent times. It is discovered that over 20,000 to 50,000 people are practicing illegal mining. The Gross Domestic Product (GDP) from mining in Ghana has contributed GHS 5355.27 million in the second quarter of 2022 per the Ghana Statistical Service.

Ghana recently is the second producer of gold and galamsey contributes about 35% of all gold exported out of the country. There is an estimate of over 200,000 people engaging in galamsey and nearly 3 million people who rely on it for livelihood. This is notwithstanding the fact that illegal gold mining (galamsey) activities contribute tremendous revenue in the communities where such thing is conducted. It must be noted, illegal exportation of gold is heavily patronised by illegal miners. Aside all this development happening, it has come with great challenges to the extent that government, environmentalists and educationalists are trying so hard to fight it.

Some communities in the Western North Region are posed to dangers due to galamsey activities since they are giving out their homes and towns. A report was made in the Asante Akyem Central Municipality in Odumase in the Ashanti Region where a mining pit dug under a house, sunk a private toilet. This led to the claiming of the life of a young woman who was using the facility at the time of the collapse. Meanwhile, some residents in the Eastern Region town of Apinamang are intimidated and frustrated as they are being forced out of their homes by illegal miners.

It is instructive to understand, galamsey is a major driver of forest and land degradation. The illegal activities have left chains of uncovered abandoned pits filled with muddy water in several areas, posing grave danger to residents of those areas. Galamsey is the biggest threat to cocoa production. Cocoa farms which generate huge revenue to Ghana are being sold to galamsey miners who quickly excavate, pump in water and chemicals, and abandon the pits when the work is done. The land becomes poisoned and cannot be used for any activity. One may see a forest but will only be disappointed when one goes deeply into the forest since it will be seen how the forest has been heavily damaged.

The Pra River, Brim River and some largest rivers in Ghana have turned into yellow colour due to the chemicals coming from illegal miners. Aquatic life is also gone to the extent that residents around those areas find it difficult to get portable water. This has caused Ghana Water Company Limited to face challenges when drawing in water from the Pra River to water stations for treatment to the extent that drawing pumps ought to be replaced on a regular basis since the machines are not able to sustain the kind of chemicals and mud.

STRANEK-Africa has noticed that government has promised to wage war against such activities as part of its contribution towards the fight of climate change and global warming. However, the war against galamsey must not be a sprint but a marathon. This is due to the fact that the activities of galamsey have resulted in the degrading of most of the country’s ecosystem, pollution of water bodies among others hence it should not be a one-off fight. It is imperative to note that the promise of Government to fight galamsey

has only remained a promise. Efforts from Government are very minimal except for attending meetings of climate change.

There are various ways in which the activities of galamsey can be curbed. STRANEK- Africa believes that there should be heavy 24 hours monitoring by the military in communities where galamsey activities is on the rise. The 24-hour military monitoring will assist in reducing the illegal smuggling of gold and the high rate of destroying forest and rivers. The country is likely to lose millions of dollars yearly to illegal smuggling. People found guilty of such illegalities should be drastically dealt with by the law. Also, significant resources will need to be invested in oversight agencies such as Minerals Commission, Environmental Protection Agency and Precious Minerals Marketing Company, the body responsible for assaying and monitoring gold exports. Chiefs must put their foot down and ensure that activities of illegal miners are not condoned. There must be active involvement of residents living in galamsey communities by saying “No” to galamseyers in order to safeguard their environment.

STRANEK-AFRICA emphatically stresses on government to have a long term plan to thumbs down galamsey. Surely, we should all be involved in building motherland Ghana. Signed.