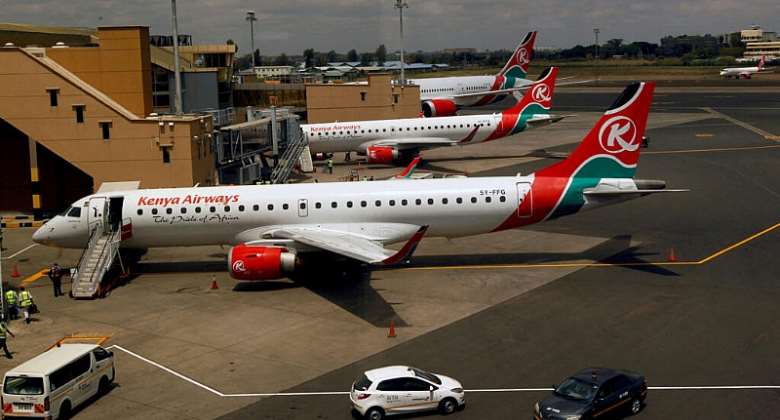 Kenya Airways management and its pilots have been unable to agree on concessions to end a strike now entering its fourth day. Meanwhile, pilots are facing disciplinary actions and court summons over a strike suspended by a labour court.

The Nairobi Employment and Labour Relations Court issued a summons to officials of the Kenyan Airline Pilots Association (KALPA) to appear in court on Tuesday 8 November "for disobeying Court orders".

On Monday 31 October, Kenya Airways (KQ) won a court injunction stopping the strike but the pilots' union voted to press on.

Allan Kilavuka, CEO and managing director of KQ, warned that any pilot engaging in the strike “is in contempt of court orders”.

On Monday 7 November, KQ announced it is recruiting new pilots and has started disciplinary action against its striking pilots. The airline warned that they could be dismissed if they do not return to work immediately.

Around 400 pilots, members of KALPA, started a 14-day strike on Saturday 5 November. Over the week end, 56 flights had been cancelled, disrupting the plans of 12,000 passengers. Only 500 of them managed to get hotel accommodation from Kenya Airways.

Joel from Burundi told RFI's Albane Thirouard that he only found out that his flight was cancelled upon arriving at the airport for a 4AM flight to Bujumbura.

“There should be a minimum of communication. After all we are giving them our money! I even received an email for the online check in. Kenya Airways did book a flight for me on Air Rwanda for the next day but I was not informed beforehand.

“There is not enough people to explain what is going to the thousands of passengers at the airport. Everybody is frustrated.”

"The purpose of this action is not to test [Kenya's] new government," the trade union said.

The KALPA pilots represent 10 per cent of KQ's airforce. They are demanding that the monthly pension contribution be reinstated as KQ froze payments since the Covid-19 pandemic. They want KQ to implement pay agreements, in accordance with clauses of the Kenya Civil Aviation Regulations.

They complain of alleged victimisation of KALPA members. And they are also asking for the dismissal of KQ's top leadership whom, they say, are responsible for "mismanagement" of the airline company.

Kenya Airways Board has rejected the calls to step down.

“No amount of threats or coercions will compel us to ask for any resignation from anyone,” said Michael Joseph, KQ board chairman.

He added that the airline is paying back the deferred salaries and should start contributions to the provident fund (contractual pension) in 2023.

“Unfortunately, we cannot do both at the same time as we are still paying back our outstanding arrears from the Covid period and keeping up lease payments on our aircraft,” said Joseph.

The pilots' union has managed, over the last two years, to freeze KQ's plans to reduce the number of pilots from around 400 to 207.

According to CEO Allan Kilavuka, the "unlawful" strike costs around 300 million KES (over €24,000) per day. In a week, he estimates that the losses will amount to around 2.1 billion KES (over €16 million euros).

“The airline cannot be able to withstand these losses,” he said.

The Transport ministry said that the action taken by the pilots “is akin to economic sabotage”.

Kilavuka said that the disruptions caused by the strike is massive.

“We uplift 250,000 passengers per month and export over 5,800 tonnes of cargo per month, including fresh meat products, flowers, electronics, pharmaceuticals, medicine, and tropical fish.

“You can imagine the impact it will have on socioeconomic development,” he added.

Kilavuka fears that, if the strike continues for a prolonged period, KQ will not be able to meet its financial obligations, including paying salaries.

Kalpa said, on 7 November, that they have sent proposals to both KQ and the concerned ministries on every single day since Friday 4 November and again on Monday afternoon with even further concessions”.

Kalpa claims that KQ has made no concessions from the proposals they presented over two weeks ago. The union added that management is not willing to meet until its members have resumed their duties.

“This is not a show of good-faith. The Management's ego and chest-thumping is to the detriment of Kenyans at large,” Kalpa wrote.

The pilots' union insists that what they are asking is “within the confines of a mutually agreed Collective Bargaining Agreement”.

“We have not asked for improved terms of service; we only ask that KQ management honours agreements already in place”.

Kenya Airways, partly owned by the government is one of Africa's biggest airlines, connecting multiple nations within Africa to Europe and Asia.