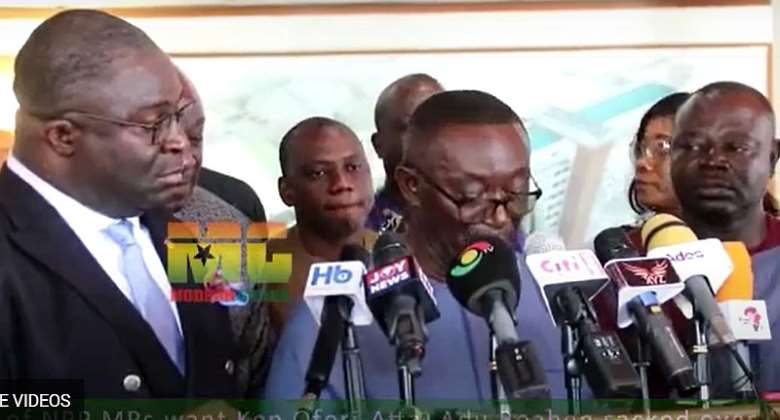 I followed with keen interest your press conference this morning calling on President Akufo-Addo to sack Ken Ofori-Atta and Charles Adu-Boahen, Minister of Finance and Minister of State at the Finance Ministry respectively.

l must from the outset commend you for standing out to be counted in this trying times. It takes only the brave to do what you have done! Be proud of yourselves because you have spoken the minds of millions of Ghanaians.

Your justifiable call, albeit its lateness is unprecedented in the history of Ghana's multiparty democracy, and l am convinced beyond doubt that posterity will forever be kind to you.

The current economic challenges bedeviling the country demands that drastic measures are taken by the powers that be to restore hope and confidence in the citizenry. And one of such measures is the dismissal of the Finance Minister, who has for sometime now shown that he is bereft of ideas to manage Ghana's economy.

It's not for nothing that even our colonial masters (United Kingdom) and other Western countries have in the last few months changed their Finance Ministers like baby diapers. It is just shocking that we, who seek to learn from them have rather remained adamant.

Point is, desperate situations call for desperate solutions! We cannot continue to exhibit moribund economic gymnastics, and yet expect new results. Ghana at this critical moment needs a Finance Minister who has the wherewithal and technical knowhow to implement prudent and sound economic policies to turn around the ailing economy.

Personally, l had wished we never got to this point, but like a wise man once said, "If persuasion fails, force must be applied." It's shocking how the typical Ghanaian political office holder hates to exit the stage when the applause is at its apogee. But like our forebears added, " A stubborn housefly which fails to listen to advice, always follows the corpse to the grave!"

Not to belabour the point, suffice to add that, if your call is not heeded to, invoke the provisions of Article 82(1) of the 1992 constitution to censure the Ministers in question, and implement your demands to the latter!

For the avoidance of doubt, Article 82(1) states, "Parliament may, by a resolution supported by the votes of not less than two-thirds of all the members of Parliament, pass a vote of censure on a Minister of State."

It is important to remind all NPP folks that "Breaking The 8" must move beyond sloganeering. The government must do and seen to be doing what the people want!

Latest Photo Reports
Catch up with all the political quotes from our politicians.
Advertise here
More from Letter
ModernGhana Links
Senyo Hosi writes: Open Letter To H.E. The President The One Big Decision - Replacing Ken, If At All!
Open Letter To Hon. Dr. Geoffrey Kini, MP Nkwanta South
Open letter to the president on the hard truth for sacking Finance Minister without further delay and other national relevant maters to ensure Ghana achieve durable macroeconomic stability anchor on solvency
TOP STORIES