11 pupils die in blaze at Ugandan school for blind 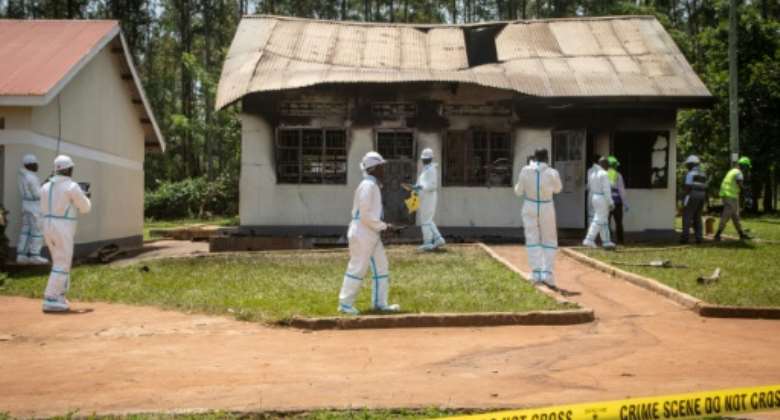 The disaster occurred at about 1:00 am at the Salama School for the Blind. By BADRU KATUMBA (AFP)

Eleven pupils at a school for the blind in Uganda have burnt to death after a fire tore through a dormitory as they were sleeping in the early hours of Tuesday.

The youngsters were trapped inside and unable to escape because the windows of the building had been made burglar-proof, a government minister told AFP.

The disaster occurred at about 1 am (2200 GMT Monday) at the Salama School for the Blind in the district of Mukono, east of the capital Kampala.

"The pupils were burnt beyond recognition and we are going to do a DNA test to establish their identities," Mukono district security head and presidential representative, Fatuma Ndibasa, told AFP.

She said the dormitory that caught fire was housing 21 girls. "But three managed to escape, 11 died and six are admitted with serious injuries, one other girl had minor injuries."

Earlier, one grieving father had told AFP he had lost his son in the blaze.

Distraught family members gather after the fire at a school for the blind in Uganda. By BADRU KATUMBA (AFP)

School headmaster Francis Kirube, who is also blind, said some disadvantaged boys at the school had been sleeping in a room next to the dorm, so the authorities were still trying to determine the identity of those who had died.

"Unfortunately we have discovered the windows of the dormitory where they were sleeping, the windows were burglar-proofed (in line with a) government directive. So the pupils could not escape the fire and got burnt," the minister for people with disabilities, Hellen Grace Asamo told AFP.

AFP images showed a charred but still largely intact building where the fire had broken out, its window frames and door blackened and the corrugated roof damaged.

Map of Uganda locating Mukono, where a deadly fire broke out at a school for the blind. By (AFP)

Forensic teams were seen in white protective gear at the school, while grieving parents gathered nearby, comforting each other.

Internal Affairs Minister General Kahinda Otafiire told AFP that the school had been cordoned off as a "crime scene" and vowed that there would be a full investigation.

"As government we shall go to the root cause of the fire and if there are any culprits they will be apprehended and the law will take its course," he added.

Princess Anne, the sister of King Charles III, had been due to visit the school during her trip this week to Uganda, which marked its 60th anniversary of independence from Britain earlier this month.

A trader in Mukono, Richard Muhimba, told AFP earlier that he had lost his son in the blaze, saying: "No words can explain the pain I am going through.

"I visited my child on Saturday, he was in good health and in less than three days he is gone... Please give me time to go through this pain," said Muhimba, before hanging up.

A friend told AFP that the child was aged 15 and that Muhimba was a father of five.

The headmaster said that although Salama largely catered to blind girls between the ages of six to about 14, the school had taken on some disadvantaged boys from the local community and that some were sleeping in a next door room.

The East African nation has suffered a string of deadly school fires in recent years.

In November 2018, 11 boys perished and another 20 suffered severe burns in a suspected arson attack at a boarding school in southern Uganda.

In April 2008, 18 schoolgirls burned to death along with one adult when a fire engulfed their dormitory at a junior school near the Ugandan capital.

In March 2006, at least 13 children were killed and several hurt when fire razed an Islamic school in western Uganda. In July the same year, six children died in a similar fire in the east.