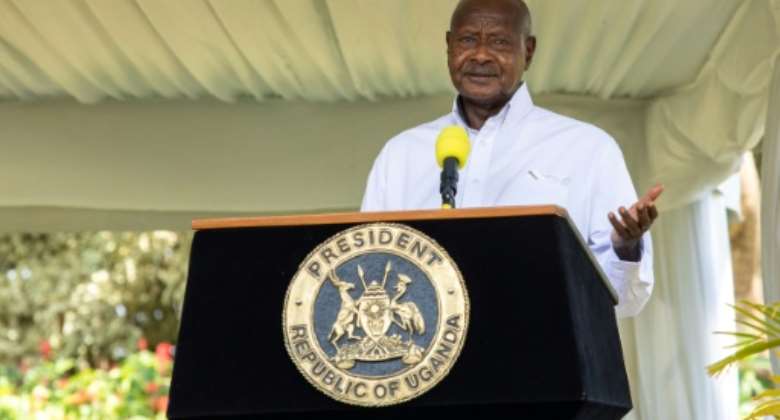 The bill was signed into law by Uganda's President Yoweri Museveni. By BADRU KATUMBA (AFP/File)

Ugandan media groups and rights activists on Monday filed a court challenge to a controversial new internet law that they protest is aimed at curtailing free speech and quashing dissent.

A total of 13 petitioners, including an online TV station, lodged the complaint with the Constitutional Court over the legislation, which was signed into law by veteran President Yoweri Museveni last week.

The Computer Misuse (Amendment) Act "threatens freedom of expression and targets those with divergent views", one of the petitioners, Norman Tumuhimbise, told AFP.

Tumuhimbise works for Digital TV, which in March this year was raided by security agents. Nine of its staff including Tumuhimbise were arrested and charged with computer misuse and spreading false information.

According to the petition, the government has been given seven days to file a defence but it is not known when any hearings in the case would begin.

Amnesty International has called for the "draconian" law to be scrapped, warning that it was designed to "deliberately target critics of government and it will be used to silence dissent and prevent people from speaking out".

"This piece of legislation threatens the right to freedom of expression online, including the right to receive and impart information, on the pretext of outlawing unsolicited, false, malicious, hateful, and unwarranted information," said Amnesty's director for East and Southern Africa, Muleya Mwananyanda.

Uganda has seen a series of crackdowns on those opposed to Museveni's rule, particularly around the 2021 election, with journalists attacked, lawyers jailed, vote monitors prosecuted and opposition leaders violently muzzled.

'Rise up and defend rights'

Opposition leader Bobi Wine, who unsuccessfully challenged the president in 2021 and has often been targeted by security forces, said the adoption of the law was not surprising.

"Museveni is aware he is unpopular and he is putting such laws to muzzle the population," he told AFP.

"This time people should rise up and defend their rights because the civil space is being restricted time and again."

Amnesty noted that the new legislation contained some useful provisions such as right to privacy and responsible coverage of children but "it introduces punitive penalties for anyone accused of so-called hate speech".

People convicted under the law are barred from holding public office for 10 years, which Amnesty warned was a way of reinforcing state control over online freedom of expression, including by political opposition groups.

Offenders also face fines of up to 15 million Ugandan shillings (about $3,900) and prison terms of up to seven years.

"Ugandans must be able to exercise their right to freedom of expression without fear of being targeted by the criminal justice system," Mwananyanda said in the Amnesty statement issued on Friday.