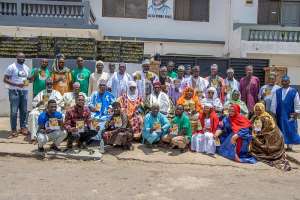 The Coalition of Zongo leaders against Open Defecation in the Ashanti Region on Thursday, October 6, paid a courtesy call on the National Chief Imam, Sheikh Usman Nuhu Sharubutu.

The purpose of the visit was mainly to seek his support for a nationwide fight against open defecation in Zongo communities across the country.

Earlier this year in July, the office of the Ashanti Regional Chief Imam had an engagement with a team of officers from the Ministry of Sanitation and Water Resources.

At the end of the engagement, the Ministry’s team sought permission to promote ownership of household toilets during the Eid-ul-Adhar Prayers at the Central Mosque.

Subsequently, the office of the Ashanti Regional Chief Imam led a campaign to promote the ownership of household toilets, leading to the birth of the Coalition of Zongo leaders against Open Defecation.

Riding on the back of the campaign, the Ashanti Regional Chief Imam and the members of the coalition are in Accra this week asking the National Chief Imam to get involved to make the promotion of household toilets in Zongo communities a nationwide agenda.

“With all these plans and activities ongoing, the Office of Ashanti Regional Chief Imam, in consultation with all the Imams and Zongo Chiefs in the Eight Assemblies decided to pay a courtesy call on the National Chief Imam, Sheikh Usman Nuhu Sharubutu, who was also made the Chief Sanitation Patron by the Minister for Sanitation and Water Resources, Hon. Cecilia Abena Dapaah in 2019, to seek his blessings for the Coalition of Zongo Leaders Against Open Defecation and buy-in for effective implementation of the Project in low communities in Greater Accra and Greater Kumasi,” the Ashanti Regional Chief Imam, Shaikh Imam Abdul Mumin Haruna said when his office called on the National Chief Imam today.

He added, “We will therefore entreat His Eminence to nominate an officer from his Office to liaise with the Ashanti Regional Office to ensure that all Imams across the country join in the Coalition of Zongo leaders Against Open Defecation.”

According to Shaikh Imam Abdul Mumin Haruna, the call for the Project to be extended to all Zongo Communities is premised on the fact that the Project’s design through the provision of the biodigester toilet technology is very convenient for the Zongo communities because it does not require too much space to construct.

“Also, the price of the facilities being 1200ghc for a complete toilet and 700ghc for a biodigester with a toilet seat and handwashing basin is very affordable for low-income households,” he continued.

The delegation, whilst in Accra, will also pay a courtesy call on the Minister for Sanitation and Water Resources today later today to assure her of their support to the Ministry, not only in the fight against open defecation but also to assist in improving sanitation in Greater Kumasi and beyond.

The delegation will cap the trip to Accra with Prayers and promotion of household toilets at the National Mosque, Kanda on Friday 7th October 2022 at 1:00 pm prompt.