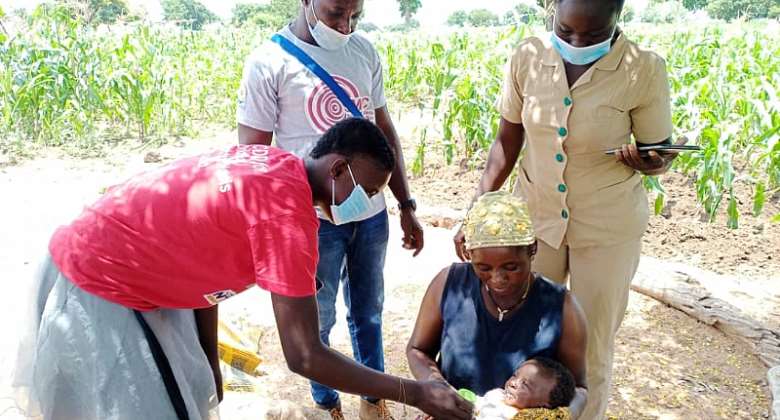 The third and fourth phase of the four rounds of the 2022 Seasonal Malaria Chemoprevention (SMC) exercise, has ended successfully in the Upper East Region, with the Talensi District topping the list for the third and fourth round with 113 and 116 percent respectively.

In an exclusive interview with our Correspondent in Bolgatanga, the Upper East Regional Malaria Focal Person, and an entomologist Sydney Abilba said, since 2016, the Ghana Health Service and its partners implemented the program with the aim of registering at least 90 percent of the target population (3-59months) during the period of SMC, to dose at least 95 percent of registered children during the period of SMC, to sensitize at least 80 percent of caregivers on the benefits of SMC throughout the period of implementation, and to ensure accurate documentation of SMC implementation process and logistics across all levels.

Mr. Abilba indicated that from June to July this year, the Ghana Health Service with support from partners started the first round of the SMC, which commenced in 2016 in the Region. He said the exercise is focused on children under five age 5 to ensure that, they are well protected against the deadly malaria disease. Normally, when children get malaria, the effects are devastating.

The Ghana Health Service has put some interventions in place in order to control malaria. Mr. Abilba stated that is often scheduled during the rainy season which is when breeding sites are common for the vector and kids get a lot of transmissions. He added that they targeted two hundred and fifty-four thousand, three hundred and 86 people (2, 54,386) out of this number, they choked 86.7 percent.

The Regional Focal Person however explained the inroads made so far in the exercise regarding the health of the children. He stated that the targeted population is usually estimated from the general population of the Upper East Region.

Mr. Abilba added that there has been tremendous improvement, watching from the first round, which they had increased from 87.6 percent to 102 percent in the fourth round. According to him, it implies that the commitment from caregivers, community members, and opinion leaders over the years has improved.