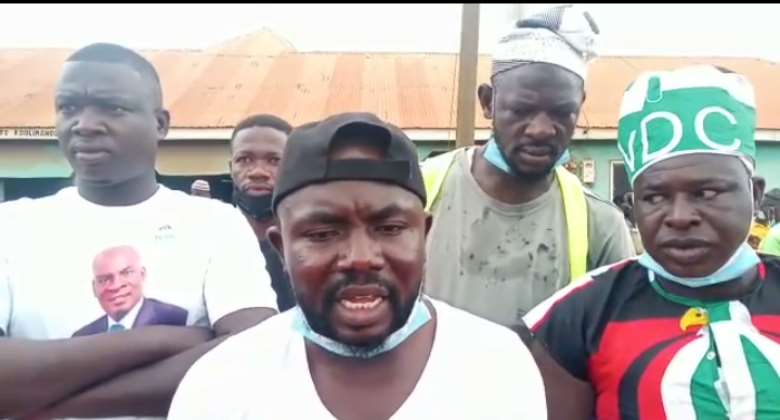 There has been an outbreak of polio and diarrhoea at Koblemahagu, a community in the Tamale Metropolis couple of months ago.

It created panic in the area and the health administration in the Northern Region.

As a result, some personnel from the Ghana Health Service (GHS) were deployed to the community to educate the residents on how to stay healthy and save themselves from the worrisome situation.

On Sunday 3rd October, 2022, a youth group belonging to the opposition National Democratic Congress calling themselves 'First Bench' organized a clean-up exercise in an effort to improve the health condition in the community and its adjoining suburbs.

Locations including homes, cemeteries and public toilets were some of the spots the youth group paid much attention to during the exercise.

Mr. Alhassan Hanan, chairman of the youth group, First Bench said they own it a duty to take their health and sanitation their utmost priority hence the exercise.

“We have realized that every corner you pass in this area the environment is not clean and we are the citizens of the community, so we decided with our elders to clean so that we can prevent a lot of sickness,es especially diarrhoea”.

He said the 'First Bench' youth group believe in prevention than cure, and they hope the Member of Parliament for the constituency, Hon. Haruna Iddrisu will support the initiative for it to be sustained.

Mr. Alhassan used the opportunity to appeal to constituency aspirants to continue with their campaigns devoid of insults.

Assemblyman of the area, Mr. Mohammed Ahmed lauded the group for the clean-up exercise, stating that it would help manage the area's sanitation.

According to him, the sanitation situation in the Tamale Metropolis is in crisis and therefore called on the metro assembly to sit up.

Mr. Mohammed further charged other political youth groupings in the area especially members of the New Patriotic Party to emulate the examples of first bench members.

We warned gov’t against reckless borrowing, wasteful spendin...
35 minutes ago