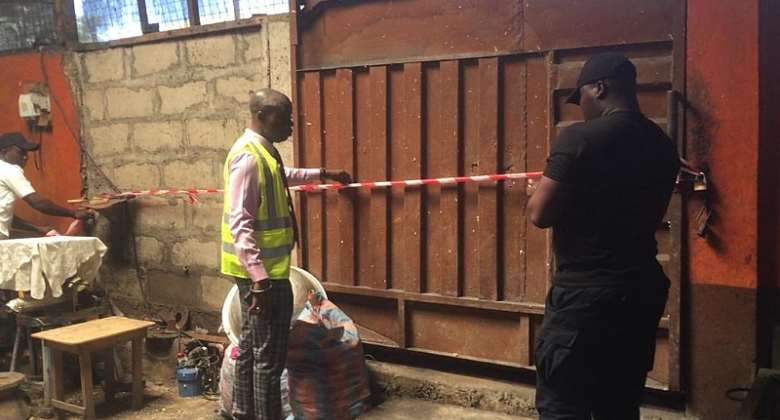 The Sekondi Takoradi Metropolitan Assembly (STMA) has closed down a public toilet run by the Constituency Chairman of the ruling New Patriotic Party (NPP) in Takoradi.

The team closed down the Amanful East public place of convenience, which is run by the Takoradi NPP Constituency Chairman Prince Arthur aka Chairman Bonnah who doubles as the Assembly member of Amanful East and also the Sub Metro Chairman of the Assembly.

His facility was founded to have connected the effluent of the public toilet to the main drainage creating serious health hazards in the area.

The STMA task force also closed down another place of convenience along the Cape Coast station road for similar offence.

The Assembly also closed down an eatery at the Cape Coast station. It also asked the operators of a well-known food joint, Daavi Ama, to close down its kitchen due to the unhygienic conditions it was operating in.

The enforcement exercise moved to the Best Western Atlantic Hotel, where a week's ultimatum was issued to the management to ensure a leakage at their storage facility is fixed or risk closure.

Mr. Abdul Kareem Hudu who is the head of the Environmental Health Department at the Assembly told ModernGhana News that they will continue the exercises to ensure public safety.