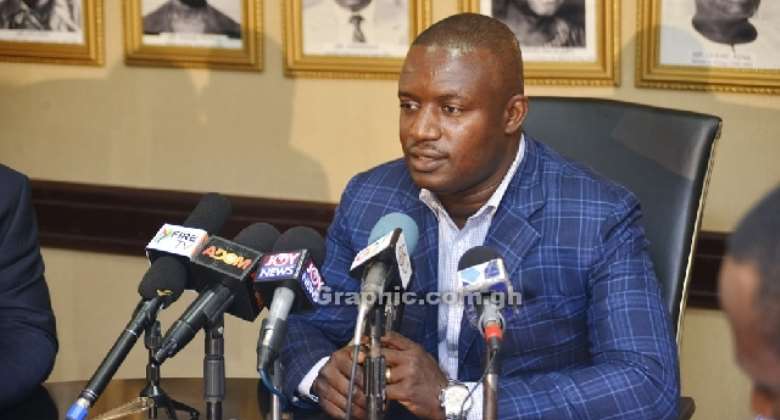 The minority in parliament says it will resist attempts by government to raise some additional $500 million by forward-falling the country’s oil resources.

Speaking on Class91.3FM’s news analysis programme 505 with Korku Lumor on September 29, 2022, the ranking member on the Mines and Energy Committee, Mr John Abdulai Jinapor, alleged that plans are afoot by government to raise the said amount.

“They are trying to raise another $500 million by attempting to forward fell our oil resources to a certain company. They’ll raise that $500 million, spend it today and then sell that oil at a fixed price of $65 per barrel. What kind of criminality is this?” he questioned.

The move he said, will be countered with all the legitimate parliamentary avenues available to the minority.

“We will not accept this at all! Immediately parliament resumes, we will activate all the necessary actions,” he hinted.

The minority had, in a statement issued on September 29, 2022, accused the government of failing to account for over $100 million oil money, a practice it said violates provisions in the Petroleum Revenue Management Act, Act 815.

They are, therefore, calling on Finance Minister, Ken Ofori-Atta, to immediately repatriate the said illegal transfers back into the Petroleum Holding Fund.

Find below the full statement.

The Minority in Parliament has noted with serious concern the inability or refusal of the Akufo-Addo/Bawumia led Government to account for over $100Million accruing from Ghana's Petroleum lifting in the first quarter of 2022.

The decision by the current NPP Government to transfer revenues accruing from about 944,164bbls of crude lifting in the Jubilee and TEN fields to a company established in a safe haven (outside Ghana) without Parliamentary approval, amounts to a gross violation of the Petroleum Revenue Management Act, 2011 (Act 815) and Public Financial Management Act (Act 921).

We have become aware that following the acquisition of a Seven percent (7%) interest in the Occidental (Oxy) transaction in respect of the Jubilee and TEN Fields by the Government ostensibly for GNPC in 2021, the Minister of Finance has clandestinely ceded the shares to an offshore company known as JOHL (a company set-up in the Cayman Islands) in a very surreptitious and opaque manner.

The Minority is very much alarmed that contrary to requirements of the PRMA, revenues accruing from the nation's oil fields are not being paid into the Petroleum Holding Fund (PHF), which has been confirmed in the 2022 semi-annual report on petroleum receipts by the Public Interest and Accountability Committee (PIAC).

As if this is not enough, the report further reveals that Capital Gains Tax was not assessed and collected by the Ghana Revenue Authority (GRA) in the sale of the 7% interest by Anadarko in the Jubilee and TEN Fields in 2021.

This NPP Government is proving by the day, that the nation's oil resources cannot be entrusted in their care because not long ago the PIAC under the chairmanship of Dr. Steve Manteaw accused them over their inability to account for about GHȼ2 billion of Ghana’s oil cash for the 2017, 2018 and 2019 fiscal years.

This is surely another "Agyapa" deal in the making and we as a Minority will not sit aloof for this Government to raid the national purse, especially at a time when the nation is struggling to raise much-needed revenues for critical expenditure.

We demand that the Minister of Finance and for that matter Government, must with immediate effect repatriate all such illegal transfer payments back into the Petroleum Holding Fund (PHF).

Failure to comply with our ultimatum will compel the Minority to use the necessary parliamentary processes to haul the Minister of Finance to parliament for possible censure.

2023 budget: Expenditure cuts are just a recycle of broken p...
55 minutes ago