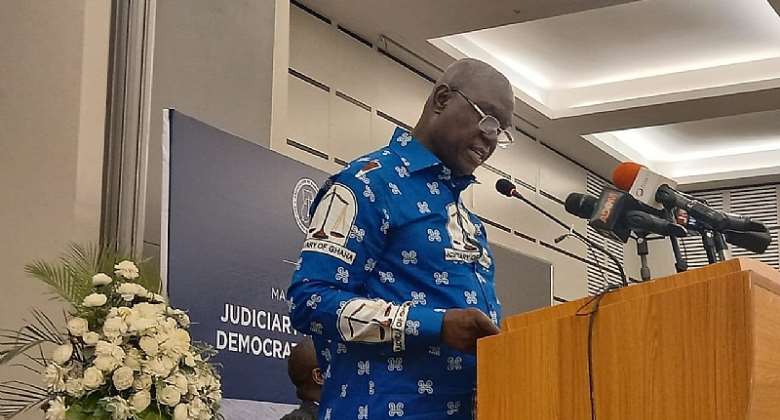 Chief Justice Kwasi Anin Yeboah says the misinterpretation and misunderstanding of court decisions regardless of the motives with which they are done should not cause judges and magistrates to waver in their duties.

Chief Justice Yeboah noted that some decisions of the courts have led to public outcry but tasked the Magistrates and Judges to withstand those pressures.

“As judges and magistrates, yours is to uphold the rule of law in the country. It must also be understood that the rights of everybody must be protected within the confines of the law.”

The Chief Justice was speaking at the 41st Annual General Meeting (AGM) of the Association of Magistrates and Judges of Ghana (AMJG) in Accra on Wednesday.

The two-day AGM is on the theme: “Maintaining the integrity of the Judiciary amidst challenges of democratic rights and freedoms.''

The occasion would afford Judges and Magistrates the opportunity to take stock and reflect on their past events and resolve to work harder in fulfilment of their mandates.

Justice Yeboah noted that criticizing decisions of the court involved the criticisms of the entire judgement and same must be done within the confines of the law.

He regretted that on many occasions when judgements were criticised, the deliverer was also personally attacked.

According to him, people should also bear in mind that the goal of democracy was the enjoyment of all human rights and freedoms

Justice Yeboah said freedom of speech had its limits, adding, “this is an inconvertible fact we all bear in mind. When dealing with institutions like the judiciary, freedoms should be within the law.

We cannot forbid people from expressing their sentiments but unsubstantiated and wild allegations against judges, physical and verbal threats and attacks on judges, perverted the course of justice and same must not be countenanced.”

According to the Chief Justice, this also seems to erode the hard earned and enviable reputations chalked by the Judiciary to the admiration of the international community.

He said the Judiciary would continue to provide Judges and magistrates with the needed logistics and infrastructure to deliver.

Chief Justice Yeboah commended judges and magistrates who tirelessly worked to keep the peace in the country.

Mr Justice Anthony Kwofi, President, AMJG, also recalled how some judges and magistrates had come under attack, following the delivery of judgements.

Justice Kwofi said the association was not against constructive criticisms which made parties to sit up.

He said judges, by nature of their work, could not go on air to defend themselves, adding, the association had been compelled to come out with various statements in support of some members who had been maligned and attacked by various publications.

The President of AMJG called for the improvement of infrastructure of some of the courts.

He also appealed for the payment of allowances to members promptly and avoid delays, especially in an era where prices of petrol kept rising.

Mr Alfred Tuah Yeboah, Deputy Attorney General, said the stability of the judiciary was based on public trust and confidence in the judiciary.

According to him, the judiciary earned that trust and confidence by faithfully discharging its duties and maintaining its ethical standards.

He noted that public perceptions of the judiciary were often coloured by misunderstanding of the decisions and judgements of the courts.

He was worried over some distorted coverage of the courts by the media and called for collaboration between the judiciary and the media to ensure accurate and fair reportage for public consumption.

Mr Samuel Afotey Otu, President of Judicial Service Staff Association of Ghana (JUSAG), said the theme for the AGM was apt and urged the Judges and magistrates to continue to protect the fundamental human rights and freedom of citizens.

There were goodwill messages from the Ghana Bar Association and the Ghana School of Law.