Pregnant woman, husband and two children wiped out in gory accident at Kronum 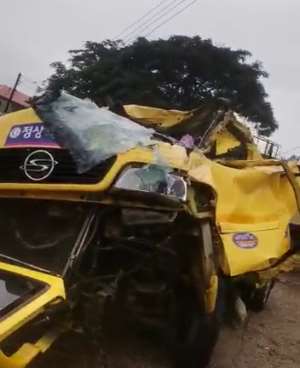 Four passengers including a pregnant woman have died in a gory accident at Kronum in the Suame Municipality of the Ashanti Region.

The impact of the accident according to eyewitnesses caused the sprinter bus to roll and sat on the roof of Ssangyong vehicle, killing the pregnant woman and her two children on the spot.

The husband was however pronounced dead on arrival at the hospital.

Some residents who witnessed the unfortunate incident told this reporter that, the driver of the sprinter bus suffered severe injuries and is currently receiving treatment at the Okomfo Anokye Teaching Hospital.

The four were said to have boarded the Ssangyong bus from Kumasi to Techiman.

When contacted the Ashanti Regional Police Command said they were not aware of any such accident.

The Public Relations Officer for police in the region, ASP Godwin Ahianyo said they had not received any report of the accident and so could not speak to it.

This was after Motor Transport and Traffic Directorate (MTTD) at the Suame Divisional Headquarters who were reported to have gone to the scene denied giving information on the accident to this reporter with an excuse that only the regional police command has the information.