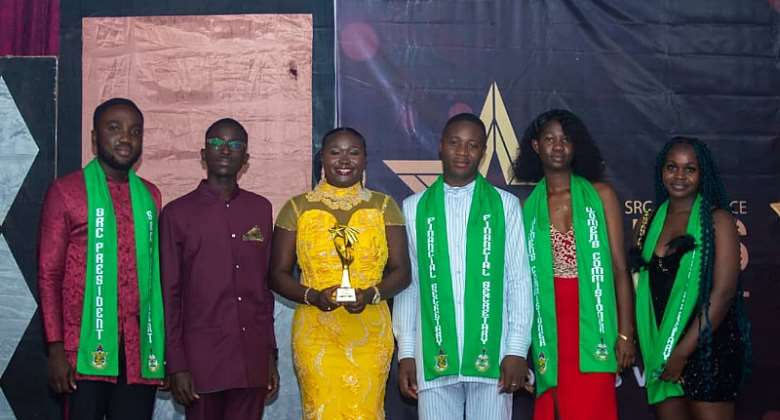 Dr. Love Konadu, Doctor of Repository Communication who is also the president of Mama Love Foundation, the CEO of Love K ventures and a motivational speaker has been honoured by the SRC of KNUST Obuasi campus for her sterling contributions towards women empowerment and humanity in general.

She received the Honorary award alongside Professor Richard Buamah, Coordinating Dean of the KNUST Obuasi Campus, Master Stephen Abban, a former SRC President of the school and some students, at an award and handing-over dinner held by the Students Representative Council (SRC) of the school.

The Mama Love Foundation has been in the news for championing the cause of women with focus on training and empowerment especially widows to make them economically independent. The foundation has been training girls in fashion, design and other disciplines.

In her interactions with the Media, Dr. Love Konadu lauded the students' body for recognising her efforts in empowering women and the youth. She said she has been working closely with the SRC of the KNUST Obuasi campus since the school was established.

"Recently, I delivered a lecture here at Public Relations and communication summit 2022 where I spoke on the role of the media, traditional media, social media in the effective dissemination of information," she stated.

The occasion was also used to swear in the newly elected SRC Executives led by its President Master Albert Ashie Lawerh. He commended the past SRC administration and the school's management for remarkably steering the affairs of the school. He promised to continue from where they left off. He takes over from Stephen Abban who resigned from his position as SRC President prior to the elections.

The SRC Vice President of KNUST main campus Deborah Afia Boakye assured students of the KNUST Obuasi Campus that, there are plans by management of KNUST and SRC of the main campus to extend developmental projects to the Obuasi campus.

She encouraged the newly elected SRC executives to work as a team to enable them effectively deliver on their mandate. "You can only succeed when you work in unity. I appeal to you to put away any personal ambitions aside and work together to deliver on your mandate and always put the interest of the student body first".

The KNUST Obuasi campus is a satellite campus of the KNUST. It was built as a form of expansion of the University beyond the city of Kumasi. KNUST Obuasi campus started with a foundation student population of 343 in 2019. The Campus was officially commissioned by the President in 2020 and now has a student body of more than 1000.

2023 budget: Expenditure cuts are just a recycle of broken p...
34 minutes ago