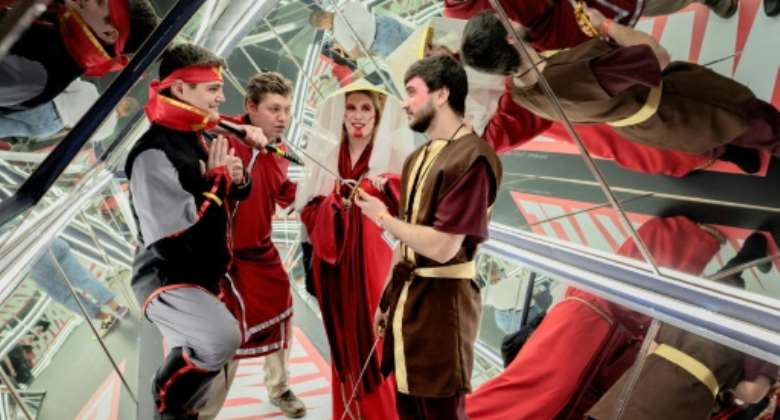 After a two-year Covid hiatus, Comic-Con Africa's return has been widely anticipated by cosplayers and fans. By LUCA SOLA (AFP)

"There's so much fur in my mouth," the 32-year-old cosplayer Andalis chuckles to friends as he dons a stiff green pleather parka over his head and shoulders.

This year he chose to cosplay Aratak, the middle-aged chieftain of the Banuk tribe in the popular video game Horizon Zero Dawn: The Frozen Wild.

After a two-year Covid hiatus, Comic-Con Africa's return has been widely anticipated by cosplayers and fans.

This year's festivities are star-studded, hosting fan favourites including award-winning Stranger Things and Twilight actor, Jamie Campbell Bower among others.

Africa's third edition of the comic convention is being staged at the national recreation centre, south of the economic hub Johannesburg. The festival first hit African soil in 2018.

Andalis has been cosplaying for six years but says his 12 years as a film costume designer and maker made for a natural transition.

During the pandemic when performances slammed to a halt, the Cape Town-raised artist shared tips on costume play and showing off his "builds", a term used to describe a finished costume, racking up a large Instagram following.

Africa's third edition of the comic convention is being staged at the national recreation centre, south of the economic hub Johannesburg. By LUCA SOLA (AFP)

Shortly before stepping on stage, Andalis's personality shifts slightly as he starts to get into character.

He complains about the stiffness of the costume, which perfectly imitates Aratak's garb, a traditional attire used to protect the character from the frigid climate of his tribe's territory.

"It is a very proud moment. I've been working on this costume for eight months," he says.

Complete with stocky faux fur tussles that swing as he turns and a regal head garment atop a fake triangle shaped beard and thick sideburns, Andalis's friend helps him put on the last component of the ensemble -- armoured quill braces.

As he walks from the dimly-lit dresser, a crowd swarms around him marvelling at the final product.

The four-day pop culture festival has won praise for opening doors for cosplayers in a country where the industry is not yet as big as in more developed nations.

It is the first time at Comic-Con for Johannesburg-based Thifhuriwi Nephawe.

She is dressed as princess Neytiri of the alien Na'vi race, in the American science fiction film series Avatar.

"The character Neytiri is for me an African woman who's very powerful and fighting for her village, for her tribe," she tells AFP.

"People from the outside are coming to try and take everything from them, so she's trying to fight against that, that's what I resonate with, just the power."